What do alarmists not want to let the “deniers” do? Google does a good job indexing the Web and placing the most relevant and referenced results on top. In the spirit of science, I let the data guide me, and ran a Google search for “don’t let the deniers *“. The results were quite interesting, although not entirely surprising. 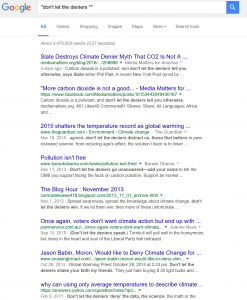 The second page was similar to the first one, except that it contained two references to some “DNA deniers.”  The phrase “don’t let the climate deniers sleep” provided some variety and comic relief.  Was it sponsored by Big Pharma, trying to increase sales of sleeping pills?  🙁 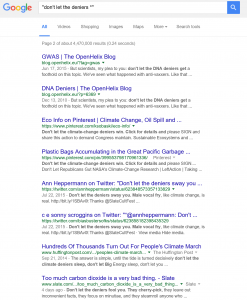 Next, I performed a more focused search for “don’t let the deniers * you”.  Google counted 5 million results.  All the results on the first page and all but two on the second one were related to climate change.  Here are the top alarmist fears of what the “deniers” could do to their flock: “tell you,” “sway you,” “fool you,” and “urge you to change your heart“. 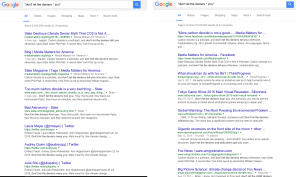 This looks like a live re-enactment of the Spanish Inquisition, complete with accusations of weather cooking, calls to drown witches (or airline executives), and worries about almighty CONSENSUS.  Historians, rejoice: you have a unique opportunity to interview modern replicas of Torquemada, to see firsthand his ways of thinking, motives, and intents, and to understand the related social dynamics.

The experiment was performed on February 22, 2016 from a large city in Texas, using the Microsoft Edge browser.  I cleaned out the browser’s cache and cookies before each search.