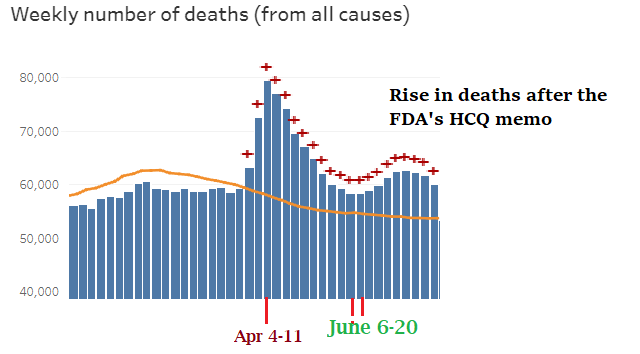 Following this peak, the excess death rate consistently dropped through the week ending June 20. On June 15, the FDA revoked the Emergency Use Authorization for CQ/HCQ. This revocation contained a memo with fraudulent scientific justifications. Then the FDA’s website was also updated with language which expanded the scope of the memo, from the HCQ use under the EUA (in certain hospital settings), to the general HCQ use for COVID-19 treatment. Before that, there was a sharp decrese in the HCQ prescription following the Mehra-Surgisphere-TheLancet fraud. The number of excess deaths started rising again, doubling to 18%  during the week ending on July 25. This is about 9,000 excess deaths per week, about the same as the number of COVID-19 deaths. One might hypothesize that most of the excess deaths might have been caused by COVID-19 and/or the countermeasures taken against it.