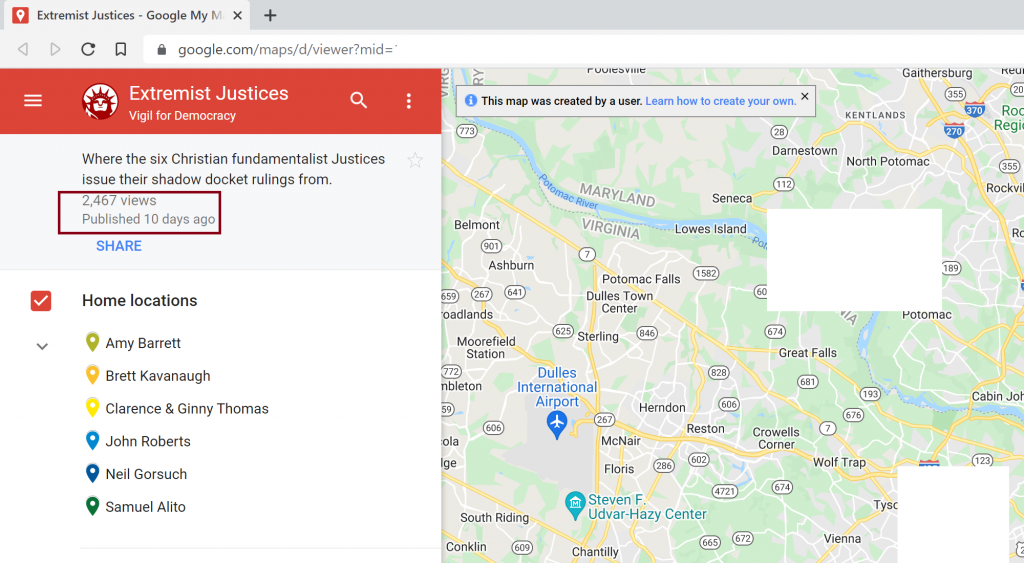 “Tomorrow, Saturday evening, following a Bans Off Our Bodies rally at noon in DC, there will be six simultaneous protests in these tony suburbs the SCOTUS 6 live in. RT please.”

“our TikTok @ruthsent which was “permanently banned” due to mass reporting is back up due to mass appeals! There’s more of us than them.”

“This is a spontaneous community protest; not led by us or any organization, but by individuals. There will be point people for each Justice.” – point people, simultaneous action, but spontaneous!

“Abort Alito” – in a picture

“TODAY, 7pm Eastern, join our #SCOTUS6 team to support @ShutDown_DC  in planning a shut down of SCOTUS on June 13”

“The six fundamentalists on SCOTUS have to understand there’s a personal cost to imposing deeply unpopular and FASCIST laws on Americans.” — May 30

“Topple #SCOTUS6. Ending the filibuster is improbable…” – Notice how this account uses the leak as an opportunity to eliminate two old institutions, maintaining the Constitutional order – independent Supreme Court and the filibuster in Congress, allowing minority some rights. Despite appearance of a small group of thugs, this group is deeply embedded in the big politics.

It is in their own words. I do not know what is going on behind the scenes. Ask the FBI Director (just kidding).

“The Court isn’t trying to hide its intentions. Like the Nazis in the 1930s, they’re going after women first – they’ll overturn Roe if we don’t rise up. Next is LGBTQ rights. #StrikeForChoice” – setting aside the revisionist history, this account might have known about the draft of the ruling, allegedly overturning Roe v Wade.