The fake news media is on the take. It is funded by Google and, to lesser extent, other Big Tech. From Google CEO Sundar Pichai’s Congressional Testimony in March 2021:

“Over the past 20 years, we have collaborated closely with the news industry and provided billions of dollars to support the creation of quality journalism in the digital age.”

“Each month, people click through from Google Search and Google News results to publishers’ websites more than 24 billion times — that’s over 9,000 clicks per second. This free traffic helps new publishers increase their readership, build trust with readers and earn money through advertising and subscriptions. We also recently announced a new investment in Google News Showcase and committed $1 billion over the next three years to pay publishers to produce editorially curated content experiences and for limited free user access to paywalled content.”

Through these 24 billion free monthly clicks and cash, Google effectively controls the “news” industry. A longer text with hyperlinks to other sources is in an article How Google supports journalism and the news industry on Google Blog. Google funds selected mouthpieces with the money obtained by pilfering content from all the web.

The news and other media, living off Big Tech “gifts”, return favor. They provide favorite media coverage, hide negative information, and work to prejudice judges and juries in the legal cases important to Big Tech. This is what a judge is likely to see in a Google search for SCOTUS “HB.20”: 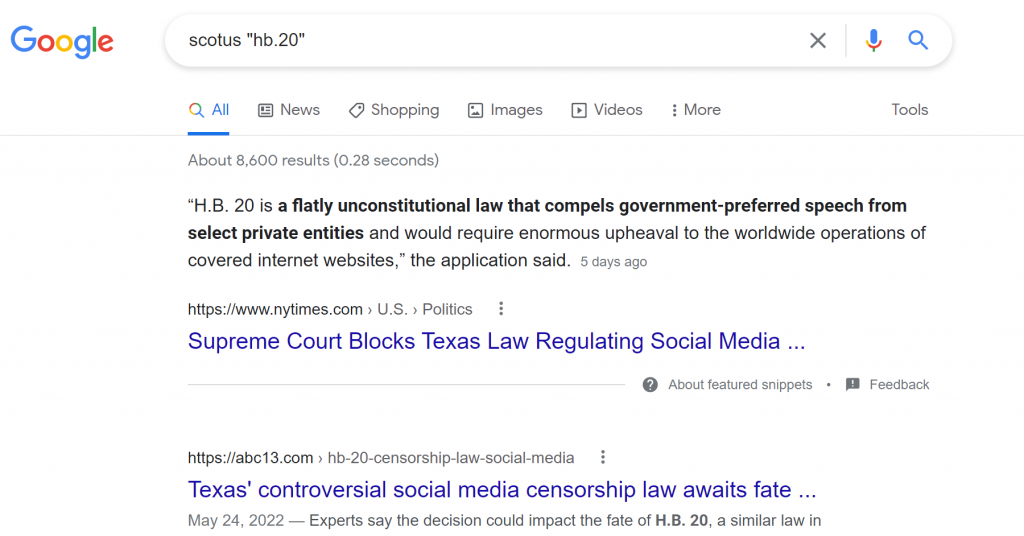 The New York Times published an opinion, parroting Big Tech legal arguments, from outright false (“compels government-preferred speech“) to highly misleading (“internet websites“, rather than internet services), to the opinions prejudicing outcome of the lawsuit (“a flatly unconstitutional law“). Google selected it and made it a featured snippet.

This is a reward to the New York Times, and solicitation extended to other media outlets to publish pro-Google news and opinions.

Originally published on May 31, then modified.