The WHDA takes a neutral or sympathetic stance toward Holocaust deniers and insinuates that their claims are controversial rather than plain wrong and abominable:

Much of the controversy surrounding the claims of Holocaust deniers centers on the methods used to present arguments that the Holocaust allegedly never happened as commonly accepted.

Somewhere in the middle of the 45 pages the WHDA reluctantly acknowledges that the Holocaust happened.  But in the summary and other places it takes a social constructivism approach, tacitly suggesting the Holocaust is a historically accepted narrative, without using the word narrative.  The WHDA avoids saying that Holocaust deniers are wrong or bad. Instead, they are criticized as persons who do not use “established historical methodologies” or do not adhere to principles used by “mainstream historians.” Examples:

Scholars use the term “denial” to describe the views and methodology of Holocaust deniers in order to distinguish them from legitimate historical revisionists, who challenge orthodox interpretations of history using established historical methodologies.

Holocaust denial is widely viewed as failing to adhere to principles for the treatment of evidence that mainstream historians (as well as scholars in other fields) regard as basic to rational inquiry.

The WHDA is perfectly non-judgmental about Holocaust denial and Holocaust deniers.  Holocaust denier lies are abundantly repeated throughout the article, mostly without rebuttal.  Even worse, some material seemingly presented as rebuttal of Holocaust deniers’ claims is selected or written up to be ineffective or even to cast further doubt.  Example:

According to researchers Michael Shermer and Alex Grobman, there is a “convergence of evidence” that proves that the Holocaust happened.

This sentence is illustrated by a dubious graph of projected growth of the Jewish population with and without the Holocaust.  The graph shows a curve splitting into multiple curves and is similar to the the discredited “global temperature” projections from the infamous Intergovernmental Panel on Climate Change.

The WHDA intentionally presents weakened or even fallacious arguments against the Holocaust denial. Such “arguments” directly lead the reader to doubt the Holocaust. Moreover, much of what is presented as argument that the Holocaust indeed happened appears as slightly modified lines from the arsenal of climate alarmism.  This is a new form of Holocaust denial –  comparing the fact of the Holocaust to the lies of the so-called “climate change.”  Additionally:

The WHDA is interspersed with the links to the Wikipedia profiles of Holocaust deniers and their writings.  In addition to the profiles linked in the text of the article, there is a separate section listing 80 real and alleged Holocaust deniers with personal profiles in Wikipedia.

The WHDA recommends its readers multiple books by the Holocaust deniers by ISBN, and references multiple external references that are hostile to the Jewish people and/or Jewish State.

The WHDA contains multiple tongue-in-cheek insults of the memory of the Holocaust victims, such as links to “Holocaust cartoon competitions” in Iran.  The WHDA also features a lot of strange material, only tangentially related to the Holocaust or Holocaust denial.

The WHDA is a “semi-locked” Wikipedia article, meaning that edits by new and unregistered users are subject to additional review.  It is also marked by Wikipedia as a good article.

The screenshot of the Google search:

The WHDA was returned as the top result in Google searches for did Holocaust happen and Holocaust happened (neither in quotes).  Each search was conducted independently of another one multiple times from multiple IP addresses in Austin, TX on October 8-9, 2017, using browsers in the clean configuration (no cookies, empty cache, and the computer not logged in into any Google services) on a Windows 10 laptop.  Then the search for Holocaust happened was repeated from Azure cloud in Texas and through proxy services in Utah and California.  The WHDA was always the first organic result.  In some cases, it was preceded by a single paid ad.  Nowhere in the first five pages of Google results appears Yad Vashem or The Simon Wiesenthal Center.

Other major search engines (Bing, Yahoo, AOL, Ask.com) returned the WHDA near the top of their organic results as well.

Google returns the same Holocaust doubting page as the second or third result in response to the query when Holocaust happened: 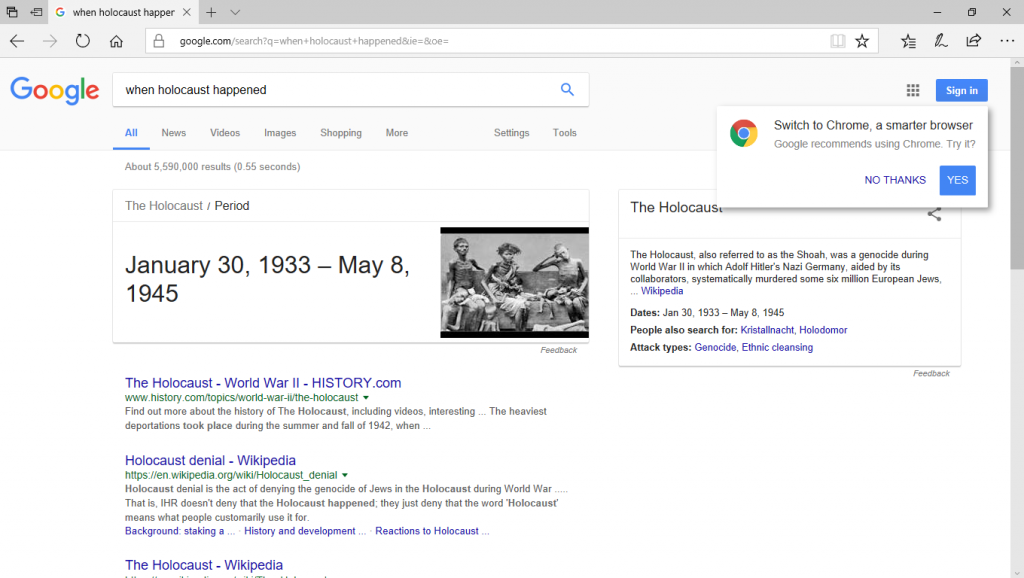 I noticed that the WHDA was edited and approved by a member of the Wikipedia Arbitration Committee (ArbCom), the top Wikipedia content approval body.

1 thought on “Google is Still in the Holocaust Denial Business”

We are now at the point in the age of global warming hysteria where the IPCC global warming theory has crashed into the hard reality of observations. -- Roy Spencer