Big Tech has been the biggest financial beneficiary of the pandemic, in the absolute and relative terms. Google, Facebook, Twitter, Microsoft, and Apple have collusively monopolized communication of information about COVID-19, and nearly doubled their market capitalization from $4T to nearly $8T.

Figure 1. The market price increase of GOOG, FB, MSFT, and AAPL during the same time 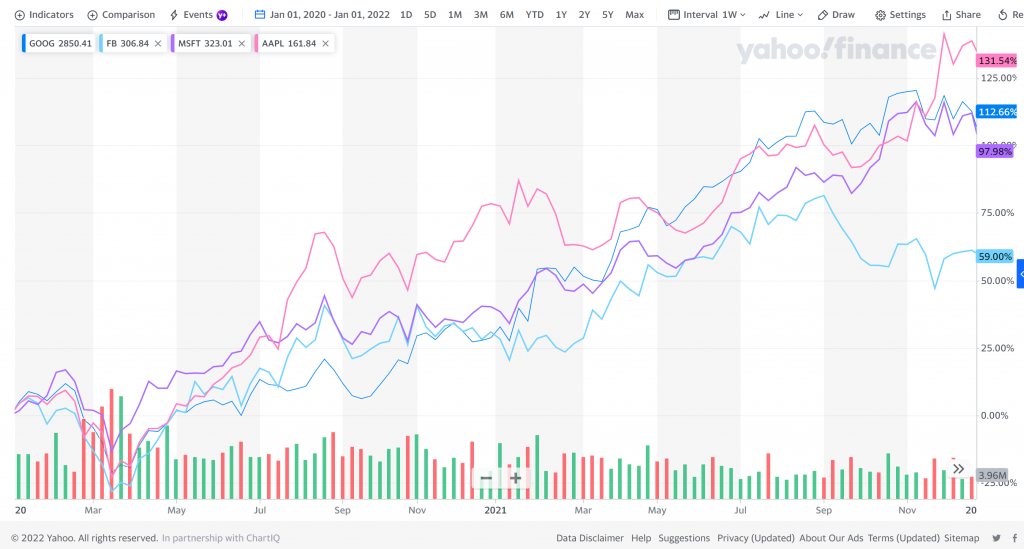 Remember how in the beginning of the pandemic, Trump asked Big Tech to aid the country? WaPo, March 11, 2020:

“Top White House aides — led by White House Chief Technology Officer Michael Kratsios — also signaled the government would soon make available more research about coronavirus, which he encouraged tech companies to analyze, according to the three participants. The hope, U.S. officials said, is that Silicon Valley might be able to deploy its engineers — and tap its powerful systems for crunching and analyzing data — to better understand the disease.”

The Big Tech has refused to help the US to fight the pandemic! Instead, it collaborated with mass murderers, to block the discussion of the SARS-COV-2 origin and the availability of treatments! They called that ‘efforts against misinformation’. The collusion among Big Tech behemoths to restrict COVID-19 information was reported on February 13, 2020 by BBC:

“The World Health Organization (WHO) is urging tech companies to take tougher action to battle fake news on the coronavirus… Mr. Pattison spoke on Thursday to a meeting of tech companies hosted at Facebook’s headquarters in Mountain View California. Other firms in attendance included Google, Apple, Airbnb, Lyft, Uber and Salesforce. … Facebook, Twitter, Youtube and TikTok are already directing users that search for coronavirus on their sites to the WHO or local health organisations… Vitamin C has been listed as one of the fake cures for coronavirus.”

Such meeting should have triggered an investigation by anti-trust authorities if they were discussing restricting the markets  for scissors, not pandemic information.

“Apple and Google have taken this action as these apps were manipulating the reliable data made available by health agencies such as WHO to create unreliable dashboards or live maps.”

Apple prohibited COVID-19 apps from organizations it did not recognize as authoritative in its App Store, the only way for iPhone and iPad users to install apps. Who would know that by purchasing a $1,000 iPhone one puts the health and even life of his family in the hands of Apple!

Google operates Play Store for its Android phones, similar to Apple’s App Store for iOS. Google also controls what apps the buyers can install. Unlike Apple’s iOS, Google Android allows installation apps from outside of its store, but strongly recommends against that.

“A group of the biggest technology companies in the US say they have banded together in a commitment to fight coronavirus-related fraud and misinformation. The group includes Facebook, Google, LinkedIn, Microsoft, Reddit, Twitter, and YouTube. All seven companies sent out a joint statement Monday evening announcing the effort.” (Microsoft’s tweet)