Google search results for ‘hydroxychloroquine’ include a Knowledge Panel with misinformation: 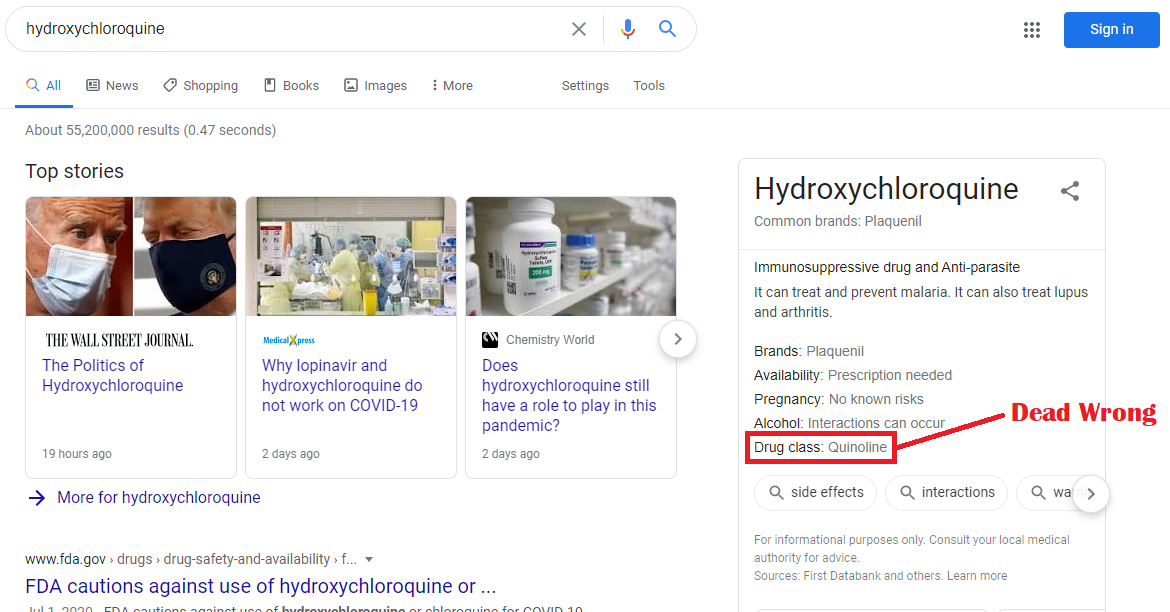 This knowledge panel features what looks like a scientific description of hydroxychloroquine, except it is fraught with inaccurate information. It attributes to Hydroxychloroquine (HCQ) the properties of an unrelated drug – hydroxyquinoline (HNL).

But  HNL does belong to the Quinoline class. HNL has been used against amoeba dysentery (amoebiasis). Amoeba is parasite, so HNL can be considered antiparasitic. Also, “[Topical] hydroxyquinoline is used to lubricate and deodorize the vagina, and to prevent the growth of bacteria” (Drugs.com).

The chemical formulas of the two drugs differ significantly:

Hydroxychloroquine (for the Wuhan coronavirus): C18H26ClN3O

The PubChem website warns that HNL is Acute Toxic, Health Hazard, Environmental Hazard, and Corrosive. HCQ has none of these warnings.

The World Health Organization (WHO) has its own classification system for drugs, and it is fraught with confusion. One top category of drugs (P) is  ANTIPARASITIC PRODUCTS, INSECTICIDES AND REPELLENTS. (WHO knows why one would include insecticides in a database of drugs?) It includes a subcategory ANTIPROTOZOALS. Under it:

AGENTS AGAINST AMOEBIASIS AND OTHER PROTOZOAL DISEASES -> Hydroxyquinoline derivatives

There was a recent RECOVERY Clinical Trial, researching the effectiveness of HCQ on COVID-19 patients, in which the clinicians made massive errors in dosage.  Google’s Knowledge Panel is misleading. This is likely the reason why doctors performing the RECOVERY Clinical Trial erroneously used HCQ in the dosages recommended for HNL treatment for amoebic dysentery.  They therefore overdosed their patients and then blamed HCQ for their mistake. In an interview with France Soir, the doctors acknowledged that they used the dosage from a treatment for amoebic dysentery, i.e., HNL, and gave their patients 2,400 mg of HCQ on the first, instead of the already established 400-800 mg.  Here are quotes from their interview, referring to dosages used for amoebic dysentery – a disease not treated with HCQ, but with HNL:

FS: How did you decide on the HCQ dosage?

ML: The doses were chosen on the basis of pharmacokinetic modeling and these are in line with the dosages used for other diseases such as amoebic dysentery.

FS: Is there a maximum dosage for hydroxychloroquine in the UK?

ML: I have to check, but it’s much more important than 2400mg, I think it’s six or ten times more.

No government website could be found that places HCQ among quinolines. Google says that its erroneous result for Hydroxychloroquine is from First Databank and others. On its website, Google contradicts this claim by saying that it creates such medical information internally: “teams of doctors carefully review and refine the information, and licensed medical illustrators create visuals.” Also, the First Databank has multiple documents about HCQ, none of which mentioning quinolines.

Many medical researchers and public health officials are likely confused by Google’s erroneous information and classification. In addition to falsely conflating  HCQ with HNL, Google was also scrubbing the web and YouTube of any mentions of HCQ-based treatments for COVID-19. 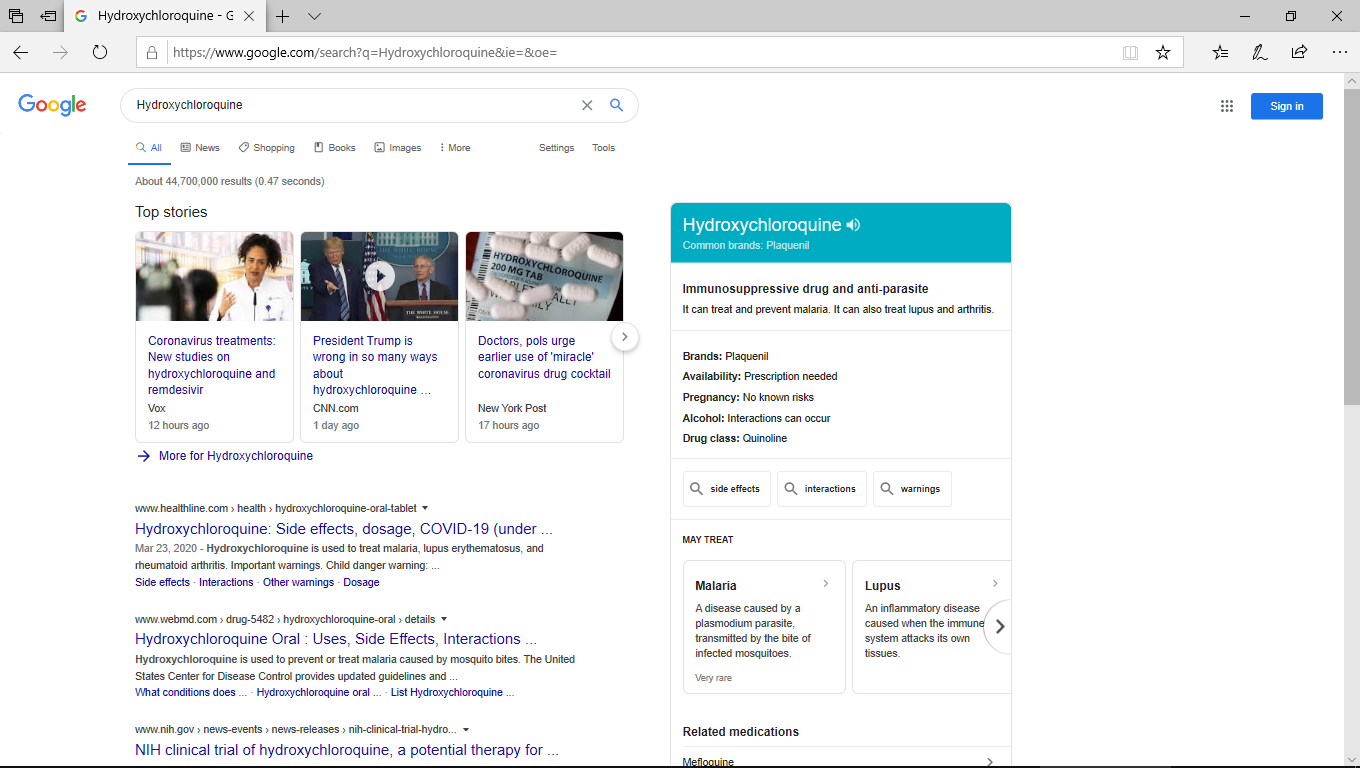 The searches were done using a browser in a clean configuration (no cookies, cached images, and other tracking attributes) in Texas.