Russia did not interfere in the 2016 US presidential election in favor of Donald Trump. It was the other way around: Russia opposed Trump’s election. From an article in RT.com (May 6, 2016): “Donald Trump: More Caligula than Augustus … America’s answer to Mussolini, and just like the Italian fascist dictator”. Democrats should be happy now. Republicans do not need to prove to anyone that they are not soft on Russia.

The news media and Big Tech have been demonizing Putin and Russia since July 2016 to give more teeth to the hoax of Trump–Putin collusion, and some people have transferred their hatred of Trump to Putin. It is long past time to move on. At least, they should show mercy to the Ukrainians, who are bearing the brunt of this Trump Derangement Syndrome by Proxy. Also notice that those who were appointed by Joe Biden to degrade the American military now talk of weakening Russia. There are other nefarious motives behind the escalation rhetoric. For example, Ilhan Omar (D-MN) introduced a legislation to collaborate with the International Criminal Court under the excuse of holding Putin responsible.

The current Kyiv regime, formed under the watch of Ambassador Marie Yovanovitch, is far from a democracy, which existed in Ukraine through 2014. The circumstances of the 2022 war are much more complicated than the naked aggression that Russia perpetrated against Ukraine in 2014. Let us review events in Ukraine and their intersection with the internal politics of the US.

The description of the current regime in Kyiv as neo-Nazi is an exaggeration, based mainly on the Azov battalion/regiment. But the anomalous Ukraine Language Law of 2019 was a sign of a fully developed apartheid. Before that, Ukrainian was the state language, but the status of Russian and other minority languages was protected by Ukraine’s constitution.

Although Ukraine rejected the apartheid policies of the Poroshenko regime, the regime’s agents in the US continued their business as usual. Eric Ciaramella, Sean Misco, Alexander Vindman, Alexandra Chalupa, and Jake Sullivan are some of the prominent figures of this network.

Ciaramella and Vindman were the central figures in disclosing the phone call between Trump and Zelensky in July 2019 and leaking a distorted version of it. That and the subsequent impeachment hearings undermined Trump’s ability to help and Zelensky’s positions in Ukraine.

This constellation of corrupt characters was nothing new. Some people (but not me) even think that the Russia hoax originated in Ukraine. Hunter Biden was receiving money from Burisma when Joe Biden forced the Ukrainian government to drop its investigation into Burisma and to make changes in the anti-corruption bodies. Then national anti-corruption bureau of Ukraine launched the investigation of Paul Manafort using a fabricated black ledger. Eric Ciaramella took part in that, too. The DNC operative Alexandra Chalupa and the Ukrainian embassy in the United States contributed to the Russian hoax in many ways.

There were no grounds to suspect Trump of collusion or even softness toward Russia. On May 2, 2016, Trump suggested shooting down Russian jets, performing dangerous maneuvers near US aircraft. The 2016 GOP platform approved under Trump said “We will meet the return of Russian belligerence with the same resolve that led to the collapse of the Soviet Union. We will not accept any territorial change in Eastern Europe imposed by force, in Ukraine, Georgia, or elsewhere.” It is time to reconsider it, I think.

Ukrainian ultranationalist channel Unian (also using brand Glavred) aided Democrat J6 provocation by claiming “Russian trace” among Trump supporters. It published a video of a group of strange persons pretending to be Trump supporters, breaking windows and getting through them into Capitol building. It used a video shot by a real reporter with digitally removed brand and copyright.

Russian propaganda spreads disinformation, but Russian forces do not use chemical weapons in Ukraine and try to minimize civilian casualties. The allegation of massacres carried out by Russian forces in Ukraine that could be checked have been proven false (i.e., Bucha).

We watch out for coordinated efforts to pull us closer or even straight into a war with Russia. Equally dangerous is the use of the Russian boogeyman to escalate censorship of Republican and conservative voices, and to threaten other opposition to the Biden regime.

This video was published by an Ukrainian nationalist channel GlavRed on January 7, 2021. 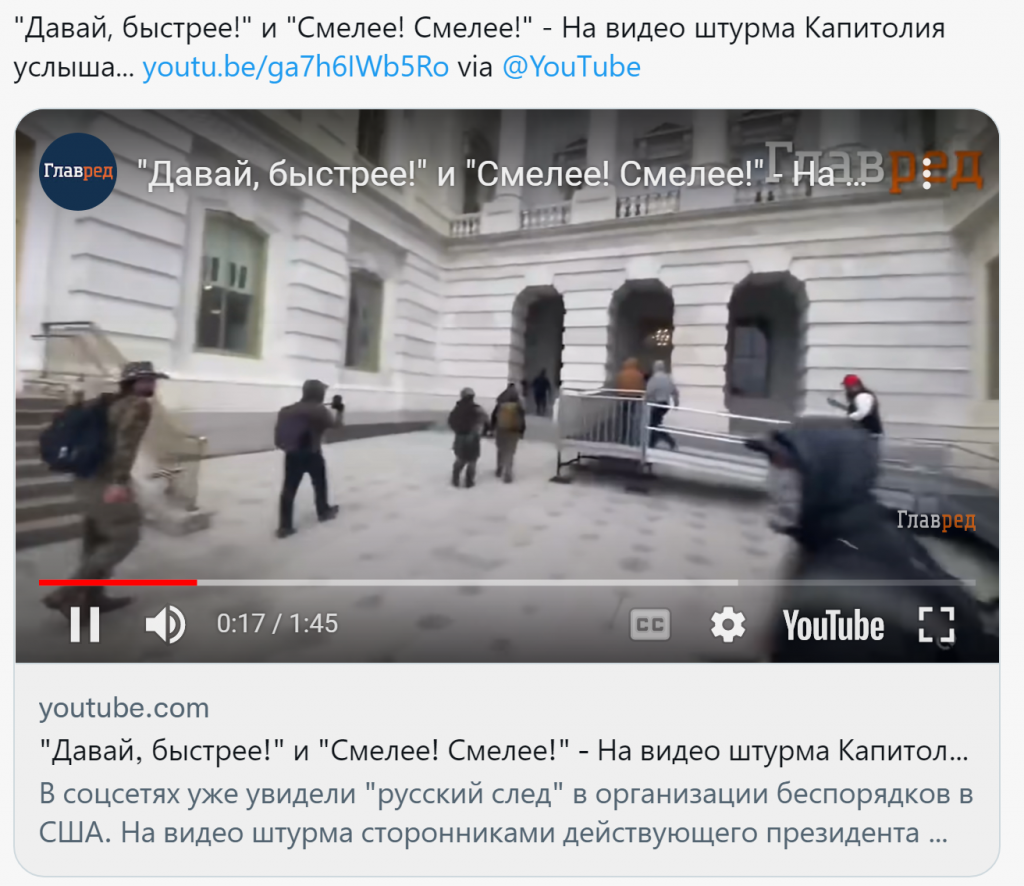 Translated from Russian: “Social networks have already seen the ‘Russian trace’ in organizing the riots in the United States. In the video, supporters of the incumbent US President Donald Trump storm the Congress building in Washington. Phrases “Come on, faster!” and “Bolder! Bolder!” are heard [in Russian]”

These phrases are also seen in the subtitles. Subtitles appear only when the video is embedded. This video was made by an independent reporter, not by GlavRed. GlavRed has deleted the original logo and added subtitles. These men are likely from antifa or an antifa-type group. It is hard to determine whether Russian was spoken.