Jim Comey, We need you to intervene in the 2016 election again – read below.

Was this statement true? No, it wasn’t. The original platform draft did not call for giving weapons to Ukraine.

At a platform committee meeting that took place about a week before the Convention, delegate Diana Denman proposed an amendment including “providing lethal defensive weapons” to Ukraine. The committee has appropriately corrected the language and softened the message to “providing appropriate assistance.” For reference, see Byron York’s  article “What really happened with the GOP platform and Russia”. Has Trump intervened in this issue? No, he hasn’t. Ballotpedia.org notes:

One striking element of the 2016 Republican platform debate was the lack of intervention by the Trump campaign. While some Trump staffers monitored the deliberations, they didn’t try to dictate outcomes. “They have not strong-armed the delegates,” noted Perkins, comparing the Trump platform effort in Cleveland to previous nominees’ tactics.

Was anything in that narrative to indicate that Trump was “soft on Russia”? No, nothing. The 2016 RNC platform says:

We support maintaining and, if warranted, increasing sanctions, together with our allies, against Russia unless and until Ukraine’s sovereignty and territorial integrity are fully restored. We also support providing appropriate assistance to the armed forces of Ukraine and greater coordination with NATO defense planning.” It also says: “In all of our country’s history, there is no parallel to what President Obama and his former Secretary of State have done to weaken our nation.”

What Does the US Government Know About Russia and the DNC Hack?
By Susan Hennessey Monday, July 25, 2016, 12:03 PM
Published by the Lawfare Institute in Cooperation With Brookings

Susan Hennessey is a Brookings Fellow. From 2002 to 2017, the Brookings Institute was headed by Strobe Talbott, a confidante of Hillary Clinton. This article lays down the party line, beginning with

“Potentially unpleasant news for Jim Comey: We need you to intervene in the 2016 election again.”

Comey was happy to oblige! Or Peter Strzok, after Lisa Page sent him this article. In her article, Susan Hennessey continues with instructions to the media:

“However, it is crucial that the media not lose the thread that Russian state efforts to influence our democratic processes is the real story here. That story cannot vanish after an initial splash, and coverage of future leaked information should note the probable Russian involvement and involve analysis as to what the intended aims of leaking each new document might be.”

Strobe Talbott is “One of the most influential and practical-minded advocates of global governance” (John Fonte, Sovereignty or Submission: Will Americans Rule Themselves or be Ruled by Others?). Talbott is also an associate of Steele and Glenn Simpson of Fusion GPS. Apelbaum on Strobe Talbott:

More from the same circle. Benjamin Wittes is also a Brookings Fellow. A fake news author from a don’t-think tank.

Is Trump a Russian Agent? A Legal Analysis
By Susan Hennessey, Benjamin Wittes Wednesday, July 27, 2016, 1:46 PM
Published by the Lawfare Institute in Cooperation With Brookings

This article builds on few others, including “Donald Trump, the Siberian Candidate” by  Paul Krugman on July 22, 2016 in the NY Times, and “Trump & Putin. Yes, It’s Really a Thing” by Josh Marshall July 23, 2016 in the Talking Points Memo. The main argument:

“An amazing debate is taking place among serious analysts and journalists in the United States regarding the relationship between the Republican nominee for President and the Russian state. This debate is not taking place on the fringes, or in internet comments, but instead in the pages of the New York Review of Books, the Washington Post, the New York Times, Slate, and elsewhere. … This high-power group is debating whether Donald Trump is a tool, wittingly or unwittingly, of Russian President Vladimir Putin.”

This is a circular reference fallacy. A lie, repeated a thousand times, remains a lie. Even if it is repeated in a form of a “debate”. Nevertheless, Peter Strzok was deeply influenced by the Lawfareblog and Talking Points Memo.

The Google Trends snapshot below shows relative number of searches for terms trump putin and trump russia. The number of user searches reflects intensity of coverage by the media. There was a  huge peak in searches for these terms on July 27, in the middle of the Democratic National Convention (July 25-28). The convention started with a scandal, ignited by WikiLeaks publication of the DNC emails, showing anti-Bernie bias. The DNC immediately redirected the media to its conspiracy theory of WikiLeaks receiving the DNC emails from Russia and Trump  colluding with Russia. On July 27 there was a local peak of the media frenzy. 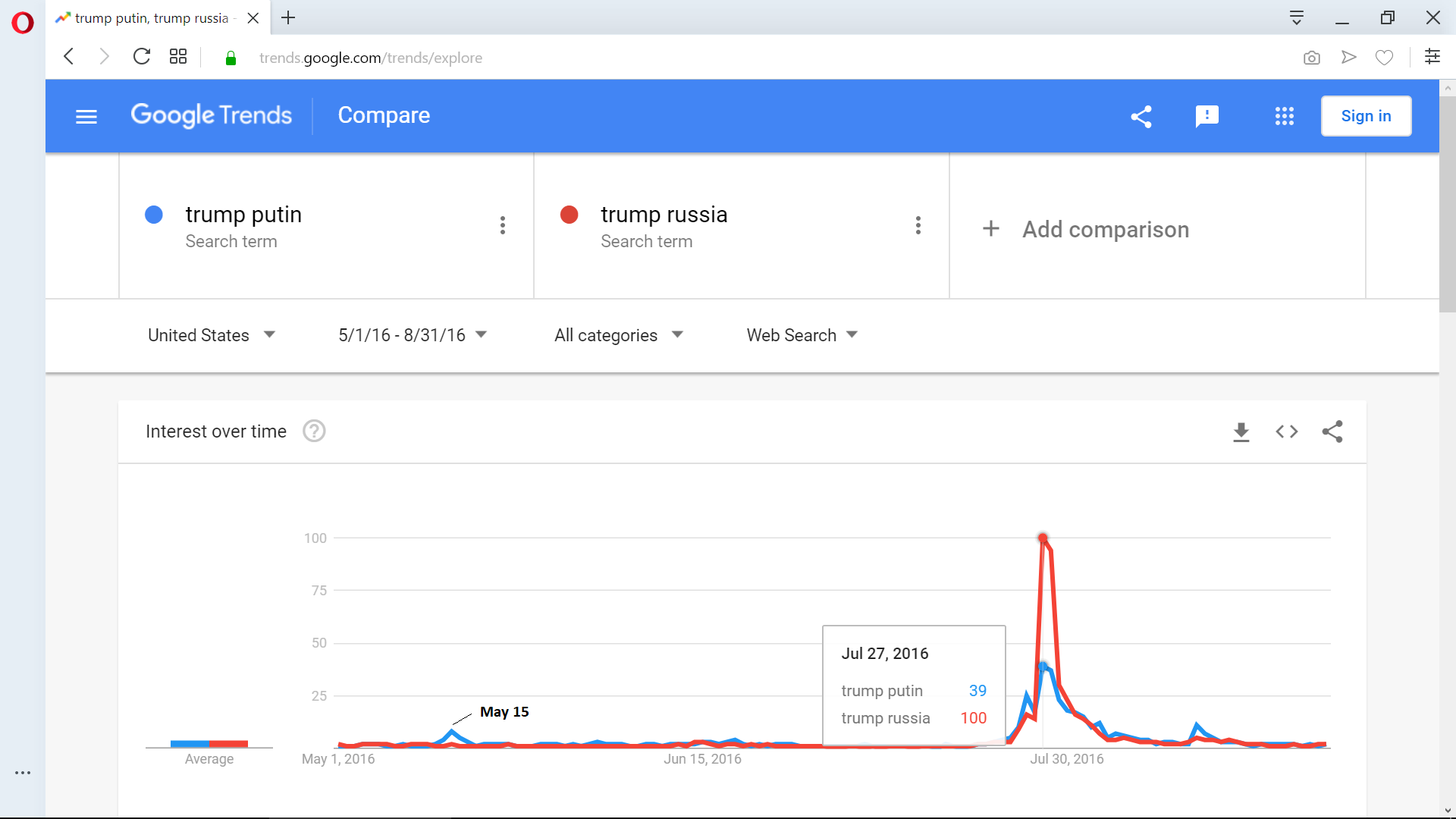 On May 13, the DNC mouthpiece Washington Post, then financed by the government of China, published an article with the title The Putin-Trump kiss being shared around the world. The article tells of  a mural painted by a local artist in Vilnus, Lithuania.  However, in these days of tweets and click-baits, most people don’t read beyond the title. The article caused the reaction  it purported and led to the little peak in trump putin searches, seen on May 15.