This continues Ray Epps is a Democrat agent provocateur (“Part 1”).

The agent-provocateur Ray Epps was neither a Trump supporter, nor an FBI asset, but a Democrat party agitator.

There is no evidence of Epps ever being a Trump supporter nor of any political activity on his part since 2011. It is implausible that a man, who was not interested in politics in the last decade, suddenly decides that the Capitol building should be stormed, travels to DC, and successfully commands a crowd to breach the Capitol. It even less likely that he is would not be prosecuted for those actions.

These facts beg the question of how Ray Epps was motivated to become a provocateur and why he has been protected from indictment and imprisonment for his actions. Contrary to what some have suspected, this does not mean that Epps was an agent or asset of the FBI, or another government agency. There is exactly zero evidence linking Ray Epps to the FBI. He is protected by the DOJ, doing bidding of the Democrat party. 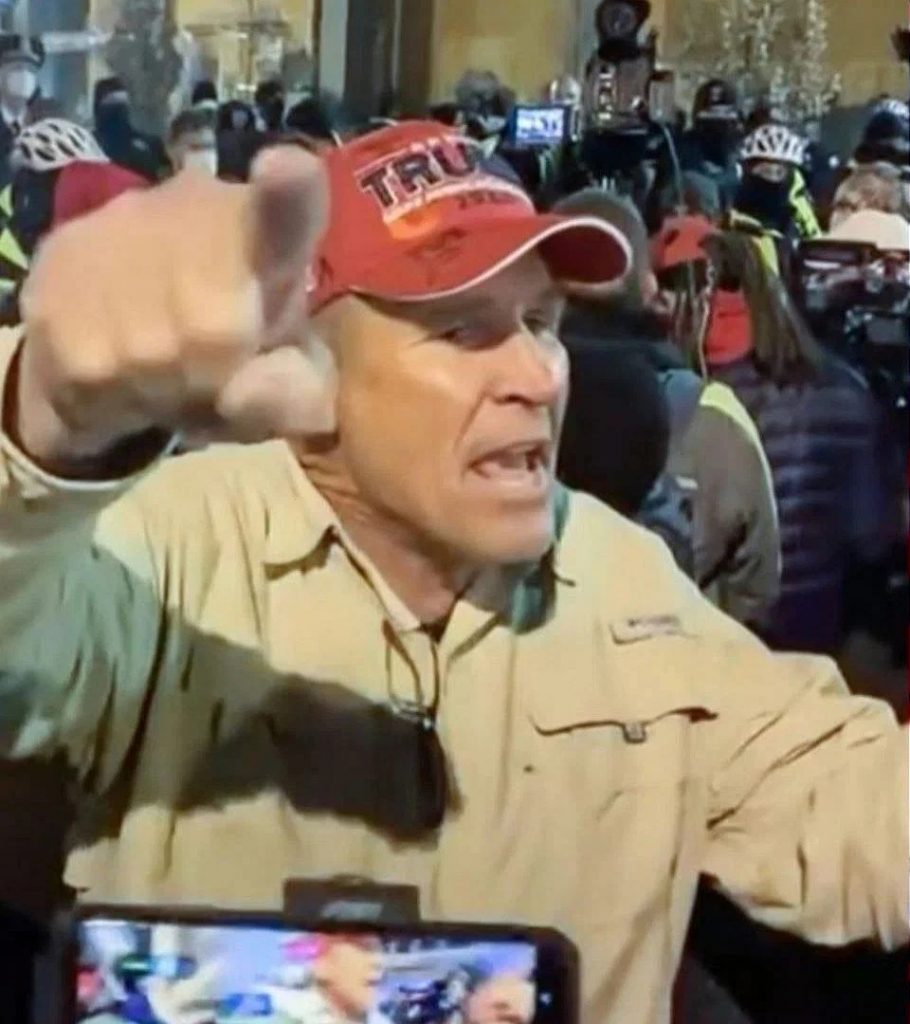 To understand who may be behind Epps, we must remember who benefited from the Jan 6 Capitol attack – the Democrat party. The joint session of the Congress was the only opportunity for Trump supporters to challenge the ballots fraud in six key states and to present other arguments, providing Trump with a path to victory. Only the Dems would want to stop this process.

The DNC was systematically sending agents-provocateurs to instigate violence at Trump rallies even in 2016. See, for example, FUN FLASHBACK: DNC/Clinton Camp Consultants Dispatched Nutters to Provoke Trump Rally-Goers to Violence. From the video  (citing the article, emphasis is added):

““I’m saying we have mentally ill people, that we pay to do shit, make no mistake,” says [Democrat activist Scott] Foval in the video. “Over the last twenty years, I’ve paid off a few homeless guys to do some crazy stuff…””

The DNC recorded this in the financial reports as “bracketing”. From the book Hacks: The Inside Story of the Break-ins and Breakdowns That Put Donald Trump in the White House (Kindle Edition) by Donna Brazile, the Hillary Campaign Chairwoman:

“On October 17, that sleazy Republican operative James O’Keefe released a doctored video [LG: brilliant video journalist James O’Keefe released an honest recording] that showed Scott Foval, who worked for one of the campaign contractors, boasting about paying protestors to incite violence at Trump rallies. The violence at Trump rallies was becoming a big issue.”

“In the budget the term we use for it is bracketing. We hire a contractor, like Bob Creamer, to do this work of organizing the opposition force, and also to organize rallies for our candidates.”  (pp. 176-177)

“Regardless, the footage of Foval boasting about picking fights with crazy people in the line to a campaign campaign rally looked terrible. Foval was taped saying, “It doesn’t matter what the fricking legal and ethics people say. We need to win this mother fucker… In the lines at Trump rallies, we’re starting anarchy.” Creamer confidently said that Hillary was definitely aware of what he was doing with the duck. “The campaign is fully in it,” Creamer said. “Hillary knows through the chain of command.”“  (pp. 177-178)

“This spooled out while Megyn asked me about Bob Creamer’s contract with the DNC. All I could say was that the contract existed before I took over as chair…” (pp. 183-184)

If the Dems (meaning the sprawling electioneering apparatus of the Democrat party) did such things back in 2016, there were no limits to what they would do in 2020-2021. Hence, the Dems sending agent-provocateurs to Trump’s January 6 rally is near certain, and Ray Epps was only one of them.

Ray Epps was an almost ideal pick for a Dems’ agent-provocateur. He is a former USMC sergeant. He is big, has a commanding voice and presence, and the comportment of someone who used to be in command. Ray Epps was President of the Arizona chapter of Oath Keepers in 2010-2011. While being a President of Arizona Oath Keepers, he registered a corporation Patriot Holdings, LLC. That helped him to establish rapport with Oath Keepers present at the rally. That allowed the media to present him as an active and prominent Oath Keepers, although Ray Epps cut ties with the Oath Keepers  in 2011 and did not resume them. Curiously, Ray Epps was also filmed next to John Sullivan (Jayden X), another leftist agent-provocateur, on the night of January 5. While this may be a coincidence, it does speak to the high concentration of agent-provocateurs present at that January 5thrally.

The FBI, on the other hand, while it occasionally does provoke people to attempt serious crimes, it stops such plots before any actual violence happens.

Also, compare Ray Epps with Stewart Rhodes, a real Oath Keeper. The fact that Rhodes was indeed an FBI informant immediately became public. If Ray Epps were an FBI agent or asset, this information would also have come to light by now.

Additionally, Ray Epps firmly denied that he had worked for the FBI or another government agency. He denied that when he spoke to federal agents and to the UNSELECT J6 committee. Lying in any of these situations is illegal and punishable by prison. If he were an FBI agent, he would not have to make these statements to them.

Also, this denial is against his interest. As an FBI informant, he would have protection for his actions, both physical and legal. However, as an instigator, not working for government, he has no protection. He can even be charged in Arizona for traveling across the state lines to incite riots (18 U.S. Code § 2101 – Riots: “ (a) Whoever travels… or uses any facility of interstate or foreign commerce… with intent— (1) to incite a riot; or (2) to organize, promote, encourage, participate in, or carry on a riot; … or (4) to aid or abet any person in inciting or participating in or carrying on a riot … Shall be fined under this title, or imprisoned not more than five years, or both.”)