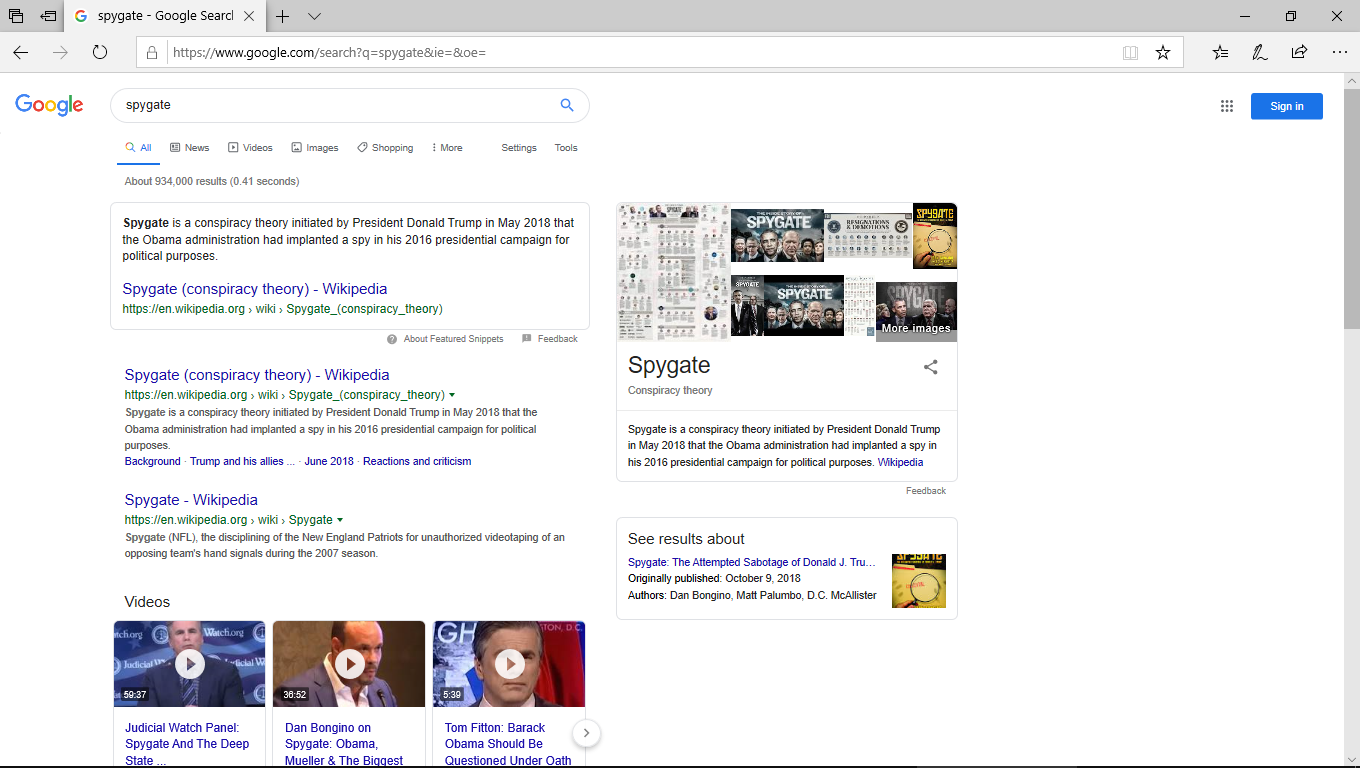 The featured snippet and the top result refer to an obscure 2007 NFL incident. Google states that its featured snippets reflect a well-established consensus. The second result and a large panel on the right come from Wikipedia’s article Spygate (conspiracy theory). How come?

The word Spygate became famous in reference to the 2016 activities of Brennan, Comey, McCabe, Ohrs et al., when Trump tweeted on May 23, 2018:

SPYGATE could be one of the biggest political scandals in history!

At that time, there was a disambiguation page for the term Spygate in Wikipedia, not changed since January 2017. On May 23, somebody added the new meaning of the word, as the editor understood it, with a reference to Trump’s tweet:

The alleged Russian interference in the 2016 United States elections as recently mentioned by President Trump.[1]

On May 24, the inaccuracy was corrected:

The 2016 FBI surveillance of the Donald Trump presidential campaign, 2016

But on May 25, the leftist deception machine kicked into high gear. It didn’t smear Trump. It attempted to alter the meaning of the word Spygate in the language and culture! Somebody erased the mention of Trump’s tweet, and changed two other entries on the page to include the word Spygate , which they hadn’t have before (emphasis is added):

Yes, it is like Google’s deletion of COVFEFE from the dictionary. It would have made Derrida proud. Some Wikipedia editors pushed back on the May 25 changes, but they were quickly overwhelmed. On June 1, a brand-new Wikipedia page Spygate (conspiracy theory) appeared

“Spygate is a conspiracy theory developed and popularized by the United States president Donald Trump … The theory appears to have had no basis in fact, and may instead have been developed to distract the American voting public from other pressing political matters of the Trump presidency, particularly the Russian interference in the 2016 United States elections.[1]”

It was based on a single reference, a false New York Times article “With ‘Spygate,’ Trump Shows How He Uses Conspiracy Theories to Erode Trust” (May 28, 2018).

The Spygate (conspiracy theory) page was further developed and a reference to it was added to the disambiguation page on June 2.   That was the last change and this is how it remains today. One can follow the history of these pages in Wikipedia, although sometimes old versions are deleted.

Google has been promoting this technique of distorting reality to activists since at least February 2019, when it published a major policy document How Google Fights Disinformation  on its blog. ‘Disinformation’ now means any information that Google doesn’t like. The relevant parts of this document declares that some search terms still return results that goodthinking people don’t like, so these search terms are labeled as “data voids”. Orwell couldn’t have imagined this!  Quotes from the document (emphasis is added):

“Because the malicious actors who propagate disinformation have the incentive to keep doing so … we regularly evolve our ranking algorithms, our content policies, and the partnerships …

… a known strategy of propagators of disinformation is to publish a lot of content targeted on “data voids”, a term popularized by the U.S. based think tank Data and Society to describe Search queries where little high-quality content exists on the web for Google to display due to the fact that few trustworthy organizations cover them. This often applies, for instance, to niche conspiracy theories, which most serious newsrooms or academic organizations won’t make the effort to debunk.”

Unusually, Google admits that “disinformation” isn’t debunked. That means that it is either unimportant (and harmless), or true. The mentioned Data & Society is an ordinary techno-propaganda mill, funded by Microsoft and “the usual suspects,” many of whom are behind other fake “fact checking” and “quality news” shops. Fake news and hate news frequently come together; with papers like ADVANCING RACIAL LITERACY IN TECH, Data & Society is part of this trend. Google’s document also points to a paper DATA VOIDS: WHERE MISSING DATA CAN EASILY BE EXPLOITED (2018) published by Data & Society, and authored by Microsoft employees, which expands on this topic:

When search engines have little natural content to return for a particular query, they are more likely to return low quality and problematic content. This is because there is little high-quality content for the search engine to return.

Google crawls about 130 Trillion web pages. How can this be “too little content”?

“There are many search terms for which the available relevant data is limited, non-existent, or deeply problematic. We call these “data voids.” “

“The term “black on white crimes” is not a popular search term, but the results provided on the first page of major search engines are very problematic. This is a classic example of a data void. Outside of white supremacist communities, no one makes websites using this phrase.”

This last sentence is an obvious lie, or an extension of the term “white supremacist” to include anybody interested in crime statistics. The article then goes full-on conspiracy theory, repeatedly invoking “adversarial actors” who are exploiting “data voids” for their nefarious ends. The article also proposes “to fill the data void.”

Google’s intent is to hide meaningful content associated with certain search terms is obvious. This technique beats the deletion of such terms from the language, and is on par with creation of Newspeak, in which words  for wrongthink don’t exist.

This technique also serves as valuable advice from Google to its leftist allies on how “to beat the system,” and manipulate its own algorithm. The DATA VOIDS paper is recited and recommended by Google at a very high level. Thus, it contains important admissions, conspicuously missing from Google’s marketing materials and congressional testimonies:

“Contemporary search engines—including Bing and Google—were designed with the goal of allowing users to access information that answer their questions. … They are consistently evolving to limit the power of those who want to contort the results of search engines for economic, political, or ideological gain. …

Finding a way to balance access to information and minimizing the likelihood that people will encounter harmful content is one of the strongest values underpinning contemporary search. Unlike other forms of content moderation, responding to data voids requires making certain that high-quality content is available in spaces where people may seek to exploit or manipulate users into engaging with malignant information. … there is an increasing need for those invested in a healthy internet information ecosystem to think strategically about what kind of content should exist so that fewer people encounter harmful data voids.”

Google also obliges in creating the “kind of content [that] should exist”, by directly subsidizing fake news and artificially increasing traffic to its own sites. The same Derrida*-like technique might have been used on the word ’coup‘. Trump talked and tweeted about the coup attempt by Comey & co in the spring of this year.  I observed that for a few weeks after that discussion, results unrelated to this coup attempt overwhelmed even my HIDDEN KNOWLEDGE / CONSERVATIVE SEARCH, built upon Google CSE. Another over-Derriden term is ‘obamanet‘. Activists prefer to create links pointing to obscure pages containing the targeted terms.

Google has become a power, actively shaping the web, and it uses its enormous might to distort users’ perception of reality.

(*) Jacques Derrida was a French philosopher, known as an author of “absurd doctrines that deny the distinction between reality and fiction” (Deconstruction). Google has a Derrida team, which was recently exposed doing something like this to unsuspecting users of Google Translate.