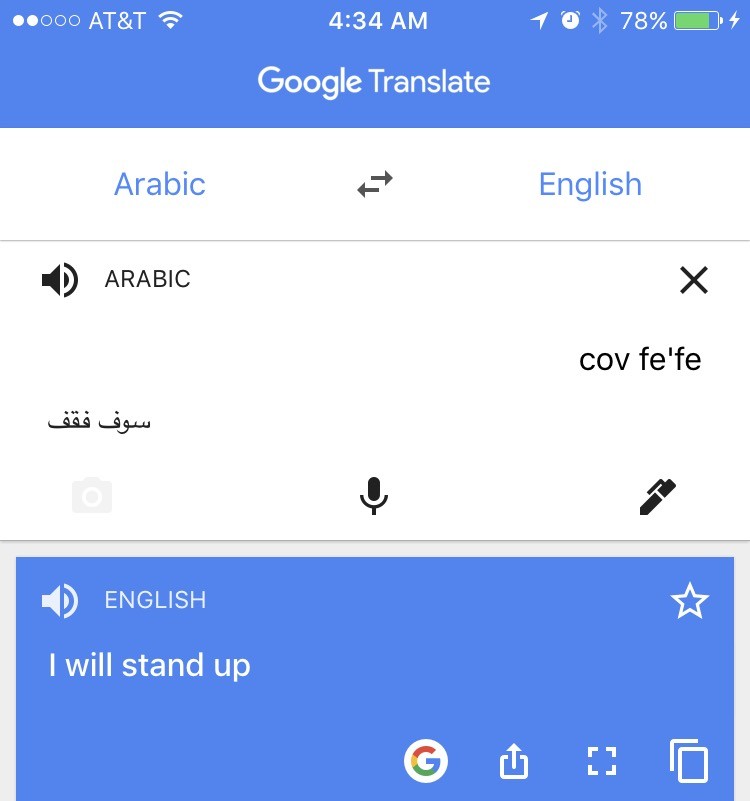 Trump used it in a tweet “Despite constant negative press covfefe“, when he came back from Saudi Arabia. Few hours later, he tweeted “Who can figure out the true meaning of “covfefe” ??? Enjoy!“

This deletion served the main prong of the coup at that time – the attempt to declare President Trump mentally unfit and to remove him under cover of the XXV Amendment. The secondary effect was to perpetuate the lie that Trump is Islamophobic. The New York Lies devoted a whole article to “debunking” this translation and slandering Trump. Tiffany FitzHenry:

“Leaked documents, titled ‘covfefe Translate Easter egg,’ reveal how Google raced to scrub the Arabic word “covfefe” and it’s meaning “I will stand up.” According to the document they knew the meaning of the Arabic word.”

“So, just to be crystal clear, Google has no problem whatsoever taking it upon themselves to alter a centuries old language – deleting an entire word and it’s meaning from virtual existence – in order to carry out a completely unstated, hidden political agenda.”

“Further documents also reveal that the team raced to ‘bad the misspellings’ as well (see below document), in essence ensuring that anyone searching Google to try and figure out what covfefe meant would never find the truth, no matter what. No matter how they searched.”

For further proof we’re already living in a totally distorted misinformation carnival, recall that Hillary Clinton chimed in the next day, quipping that covfefe was ‘a hidden message to the Russians.’ The tilt-o-whirl from hell that are our main news sources really begins to reveal itself.

It’s worth noting, in the days and weeks that followed, prompted by the covfefe debacle pundits and politicians across every media platform and cable network began talking furiously about the 25th amendment – removing a mentally unfit president from office.“

Even if no Arabic dialect had a word that could be transliterated as “covfefe” or “cov fe’fe“, this word was in the Google Translate when Trump used it. Trump probably learnt this word in Saudi Arabia. He might have even checked the spelling in Google Translate.

But deleting cov fe’fe was not enough.  As Zach pointed out in the video, Google Translate found another spelling of the same phrase – sawfa aqef. That didn’t deter Google’s Derrida team (no kidding, they selected this name: derrida-team@google.com). One of the developers tweaked Google Translate engine to “bad” this match:

Yes, an entire team worked through the night to create an alternative online reality matching the fake news pushed by the New York Times, possibly in coordination with the coup leaders.

Now Google translates “covfefe” to “as a scab“.  Google internal documents, released by Zach Vorhies and available on Project Veritas, show that Google knew (see covfefe-goal , covfefe-technical-derrida , covfefe-technical). In this video Zach explains what is not in the documents:

There is an old anti-Trump page, discussing Arabic dialects and showing a screenshot of cov fe’fe translation as I will stand up: “Google thinks “cov fe’fe” is “سوف فقف” (sawfa faqif).”

I don’t speak Arabic, but I know that it has a great variety of dialects. Some dialects are unique to Saudi Arabia: “The official language of Saudi Arabia is Arabic, while Najdi Arabic, Hejazi Arabic, and Gulf Arabic are the primary regional variants of it seen across the country.”

Twitter “temporarily restricted” the user @RealTrumpMafia, whose tweets from May 31, 2017, mocking leftist illiteracy, were used by Google in its decision. Also, their tweets from 2017 are deleted. 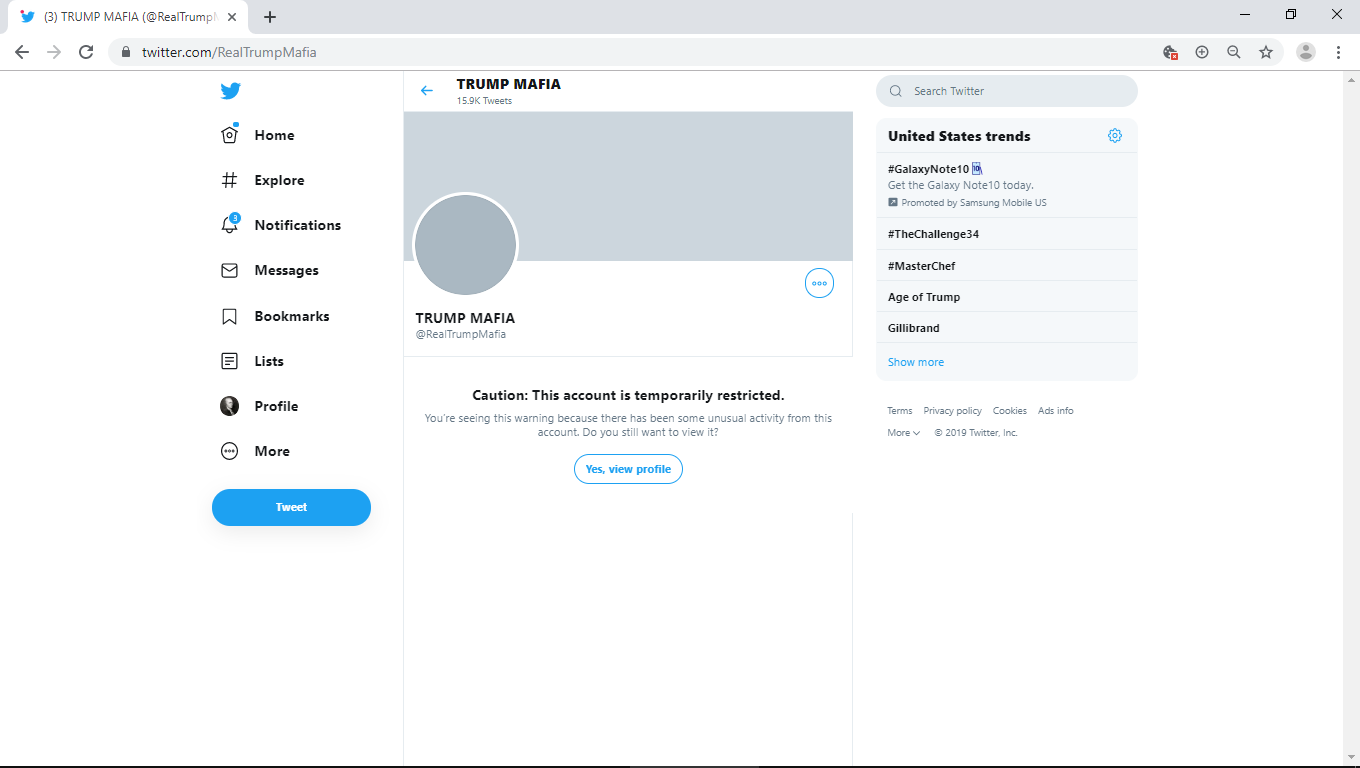 Secretary Hillary Clinton (2010): “Our Goal Is To Help Strengthen Russia”
(National Review, How the Clintons Sold Out U.S. National Interests to the Putin Regime)

Why would Putin meddle in the 2016 elections against Hillary Clinton, when she was the best thing that happened to him since becoming Russian President? Hillary was the architect of the Reset with Russia. But that is off topic here. The NR article contains a link to the YouTube video of this interview (https://youtube.com/watch?v=zulHX5jO1yY), posted by veteran broadcaster Vladimir Pozner in 2014. Now the video is gone. Google has deleted the video and terminated Pozner’s account (now he has a new one without this interview). The last time the video’s page was saved on archive.org is October 2017, when it had ~75k views. In this case, Google was not fully successful in re-writing history. This interview fragment can be found on smaller channels, sometimes with comments like: “this is very hard to find, and I found it on a channel with only 333 subscribers! thanks! SUBBED!“

Google interfered in the Kavanaugh confirmation

Google regularly deletes important YouTube videos embedded in conservative and libertarian websites, or linked to. It deleted a Fox News video in which Pete Hoekstra was debunking Clapper’s claptrap about the so-called Intelligence Community Assessment. This video was referred to in a Fox News opinion piece Was Friday’s declassified report claiming Russian hacking of the 2016 election rigged? by former CIA analyst Fred Fleitz (2017-01-08). Fred Fleitz and Pete Hoekstra debunked this so-called Intelligence Community Assessment, leaked to the media by Clapper and released (in a redacted form) a few hours before Congress certified Trump as the next President of the United States.

The assessment was cooked under the control of Brennan and Clapper, and it was signed by only 3 agencies, including Brennan’s CIA and Comey’s FBI, apparently in a last ditch attempt to prevent Trump’s inauguration. From Fleitz’s article:

Friday night, during her last show on Fox News, Megyn Kelly asked former House Intelligence Committee Chairman Pete Hoekstra whether he accepted the conclusion by 17 intelligence agencies in a recently released declassified report that Russia interfered in the 2016 presidential election and that this interference came at the direction of Russian President Vladimir Putin.

The first link refers to a YouTube video where Pete Hoekstra points out that the assessment has been produced by only 3 agencies (out of 17) and that it is missing the most important ones — the DIA and DHS. He also suggests that the entire purpose of this report is to undermine the legitimacy of Trump winning the 2016 election. But if you click the link, YouTube shows you the following: 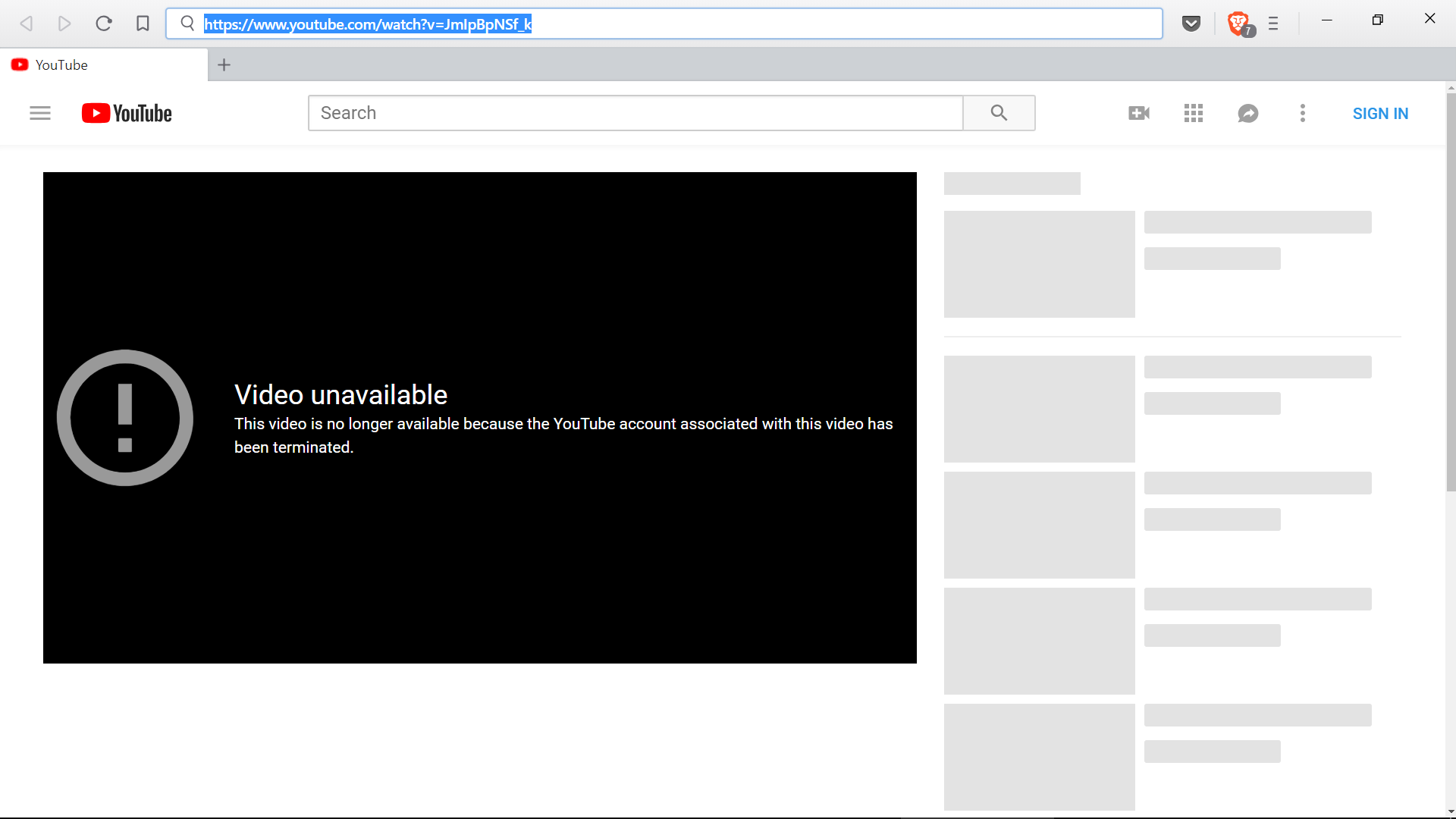 “Video unavailable. This video is no longer available because the YouTube account associated with this video has been terminated.” It doesn’t state the reason behind the termination of an account referenced by a regular contributor, respected author, and former CIA analyst at the Fox News website. The account probably couldn’t offend even a snowflake, and it contained at least one video of extreme importance to the public. Why was the account and/or the video banned?

The only answer is that Google quietly removes from public view the most important evidence supporting conservative causes and President Trump. This isn’t necessarily written corporate policy. Possibly just a few low level employees that collaborate with the new Democratic Party, the Center for American Progress, or other foreign and DNC-affiliated entities are responsible.

Another video (https://www.youtube.com/watch?v=Oi2PYn6G54Q) of the same interview, linked from Two More Reviews: ODNI / CIA Russia Report Was Politically “Rigged”… on The Conservative Tree House has also been removed by Google/YouTube. Many small conservative websites have links to deleted YouTube videos.

Google’s actions hide evidence that supports conservative positions on specific topics, and undermine credibility in general. But they also cause enormous damage to the public debate by creating multiple perceptions of reality. Liberals visiting conservative websites see works that are completely different from what authors have created and published. Where conservative authors provide rock solid video evidence, liberal readers see black screens and conclude that conservatives have made false claims and provided dead links with the expectation that readers would not check them.

The deleted video is part of Megyn Kelly’s last show on Fox News that aired on 2017-01-07. Pete Hoekstra appears 25 minutes into the show in a segment dedicated to the so-called Intelligence Community Assessment. Let me know, if Google deletes it, too.

2018-10-10 update:  Google messes with people and websites it doesn’t like in other ways, too. Russell Cook’s Gelbspan Files is an important climate realism resource. When a Google search cannot hide it, it is displayed with a false warning “This site may be hacked” and a link to Google Help, telling the user not to visit it.

Interesting. The I.T. person who helps with tech issues told me there was nothing wrong a week or so ago, and the label disappeared. Now the mighty Google Corp claims otherwise again. Perhaps something I said, which doesn’t meet their overall approval? pic.twitter.com/A27F5E9MEm

2019-02-27: Another “disappeared” YouTube video, linked to from a ClimateAudit comment: “Here is what he thought of the FBI brass under Comey’s  supervision: https://www.youtube.com/watch?v=EOl1BcrlekM”

2019-05-16: Another one, embedded in an article by sundance in The Conservative Tree House. In the video, former Deputy Assistant Secretary of Defense Evelyn Farkas admits to spying on the Trump staff. The embedded video doesn’t play. Attempt to play it on YouTube https://www.youtube.com/watch?v=gapRNpEjXUo leads to This video is unavailable screen: 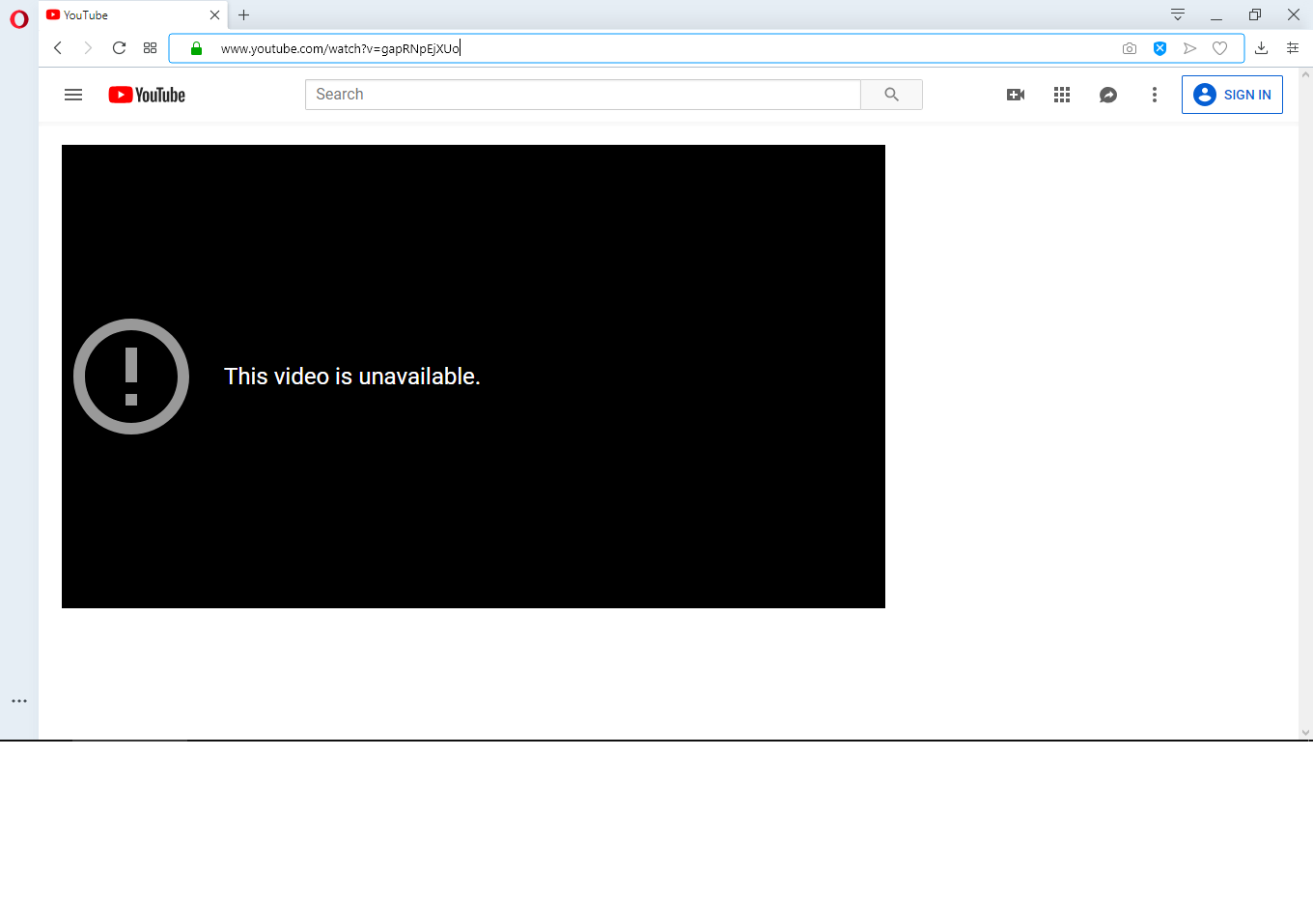 The video was uploaded on Mar 28, 2017 and was still available on May 3, 2019. The user account that uploaded it is live (as of today), but many of its videos are deleted, and he complains of demonetization. There is another disappeared video in the same article:

This video, uploaded by another YouTube user and titled Obama Aide Evelyn Farkas Squeals Live On MSNBC: ‘I Helped Spy On Trump For Obama'(VIDEO)!!! survived only few days on YouTube. Then it was disappeared with a more descriptive text This video has been removed by the user. The Matrix learns 🙂

Another disappeared video was embedded in Operation Condor – How NSA Director Mike Rogers Saved The U.S. From a Massive Constitutional Crisis…

(2019-08-04 addition) Another deleted video is one of Tucker Carlson talking about John Brennan. It is embedded in The Untold Story About Obama’s Former CIA Director, John Brennan: “A simple question follows. Since he [Brennan] is no longer in the CIA, why does he need a security clearance other than to commercially exploit it? Tucker Carlson explains succinctly here:

Spygate related videos seem to be specially targeted by Google.

2019-06-16 update: not only videos on YouTube. The homepage of Adam Carter’s G2 site,  has a reference section 3rd Party Research & Further Reading. Authors of all articles, hosted by Medium.com, have been suspended or removed by it:

https://nef4rhc.wordpress.com – one of the earliest articles, debunking the conspiracy theory of Russian DNC hacking, by an IBM veteran Skip Folden, disappeared from the WordPress.