Washington DC, January 6, 2021. The actor Jacob Chansley, playing his QAnon Shaman persona, appears on a raised platform. His torso is exposed to the wind and cold. Fifteen to thirty minutes later, he is inside the warm Capitol building. How did Jacob Chansley know he would manage to get inside?

Jacob Chansley, also known as Jake Angeli, climbed the platform wearing thick gloves (see second photo). It is smart when climbing a metal construction in cold, but how did he know ahead of time that he would do that?

After leaving the platform, he went to a locked and closed door of the Capitol while carrying a spear with a carelessly attached flag, a megaphone, an electronic device, and a small backpack (see video). In a few minutes, somebody opened the door from inside and let him and the crowd behind him to enter the Capitol building. How did Chansley know that this would happen and the precise time? Without prior knowledge, he might have expected to remain outside for hours before being arrested. At his spot, he would also have been deprived of his audience.

There is only one answer to these questions. Chansley acted under the control of persons who knew ahead of time that the Capitol would be breached. Only those who caused the breach could have known this. Only Democrats were interested in the Capitol breach on Jan 6. Only Democrat operatives could have arranged it. So Chansley must have been hired by Democrat operatives to do what he did on January 6.

Chansley was not a Trump supporter.

First, on September 20, 2019, he had taken part in a far-left Green New Deal and climate-cult gathering. A fake news outlet, The Arizona Republic, published a puff piece of that gathering on its website with three respectful pictures of him. In one of them, he stands next to a placard that says “The poles are shifting.” According to the reporter’s description: “Jake Angeli, shamanic practitioner, leads the crowd in a yell before the march in solidarity with climate activism groups across the country to the Arizona State Capitol Building….” Yes, the fake news media buys this crap.

Second, Chansley’s conduct after January 6 was anti-Trump. Immediately after taking part in the Capitol breach, he said that Trump had caused him to do this. His attorney Albert Watkins told reporters what Democrats wanted the public to hear: “Mr. Chansley is an American… He took seriously the countless messages of President Trump. He believed in President Trump” and “My client had heard the oft-repeated words of President Trump…The words and invitation of a president are supposed to mean something.”

Third, Chansley’s conduct before January 6, 2021, was anti-Trump. After the mentioned climate gathering, Chansley changed his body paint and started performing the QAnon Shaman persona. Democrats and their allies in the media have been smearing members of the MAGA movement as “QAnon followers or conspiracy theorists” for a long time, although #QAnon is best known as a Twitter hashtag. Democrats and their media allies have also been accusing us of having anti-scientific beliefs. The QAnon Shaman persona created and performed by Jacob Chansley provided perfect (but fake) evidence for both smears. As QAnon Shaman, Jacob Chansley would pop up at MAGA events with a sign “Q sent me.” He gave interviews and pretended to be a bona fide Trump and MAGA supporter. Nobody can prevent a person from pretending; but the mere fact that one undertakes a pretense does not make this pretense the truth. 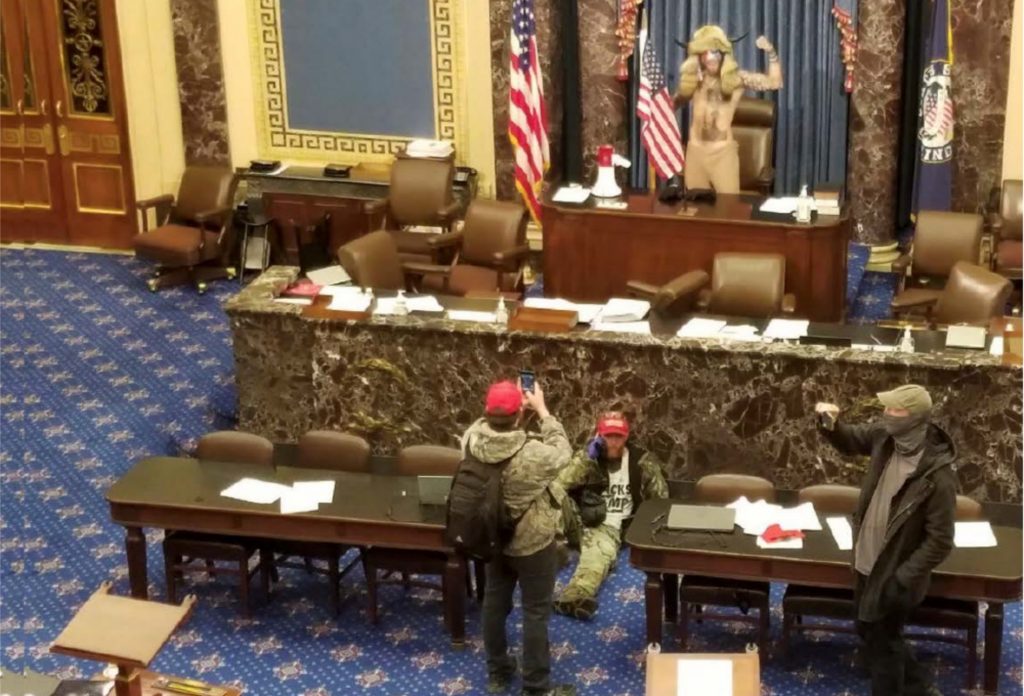 By the way, if Chansley were a Trump supporter and had outed himself as one, he would never have found another acting job.

Blatant false flag operations by leftist and/or Democratic operatives are usual now, likely because the media and Big Tech provide cover up.

Even in 2016, they sent agents provocateurs to provoke violence at Trump rallies. (Remember Creamer and Foval?) That was the last year in which the mainstream media showed any interest in investigating and condemning such behavior. Since then, the MSM has been looking the other way, and Big Tech has been actively supporting and defending these provocations. Top-tier Big Tech oligarch Reid Hoffman, a co-founder of LinkedIn, even funded a false flag operation against Republican Roy Moore in the Alabama special Senate election. Democratic provocateurs also used to get themselves photographed with one-sided Nazi flags in front of MAGA rallies. Big Tech and the fake news media eagerly distributed such photos.

But on Jan 6, they made a mistake. It is very unlikely that anybody would plan to spend hours outside with his torso exposed to 42°F cold and 20 mph winds.

Jacob Chansley carried a real spear, with a pointed blade at the end. The American flag was attached to it carelessly with ugly fasteners (another hint that he was not a MAGA supporter). A spear is a deadly weapon. In close quarters, it can be even more dangerous than a handgun. To the police, then, he should have looked like a madman with a deadly weapon. Nevertheless, somebody opened the external door to the Capitol building for him and let him walk around. The police also watched him taking the seat of the president of the Senate and leaving a threatening letter for Vice President Mike Pence (see video). One video shows a U.S. Capitol Police officer verbally allowing a crowd to be inside the Capitol, to march, and to protest there. This crowd included the spear-wielding Jacob Chansley. At about same time, another USCP officer shot and killed unarmed Ashli Babbitt.

The Jan 6 breach of the Capitol had been well prepared, but not by the side that has been accused of preparing it.

I am not the first to notice these circumstances and what they imply. But Big Tech social media censors have been removing such observations from the Internet. A Jan 6 tweet by @KelemenCari said: “Trump supporters don’t usually attend ‘climate activism’ events. The guy is an actor. Who knows what side he’s on?” Twitter quickly deleted her account.

Beware of the discreditation tactics employed by the likes of Big Tech “fact checkers.” It is closely related to a variant of the poisoning the well fallacy: “Poisoning the well is a logical fallacy in which irrelevant information is offered to the audience in advance or instead of the relevant information in order to discredit the arguments of the source…” per SES. In this case, a manipulated or staged photo is being circulated on the Internet in which Chansley, in his shaman character, is standing in front of an Antifa or BLM demonstration. The “fact checkers” and fake news media use this photo to discredit reports that Jacob Chansley took part in left-wing events. This discreditation tactics is employed by the left all the time. See my How Google and MSM Use “Fact Checkers” to Flood Us with Fake Claims and Yaacov Apelbaum’s Down the Discreditation Rabbit Hole.

Ray Epps was another Democratic agent provocateur who figured in the events of January 6. Indeed, everywhere Jacob Chansley went on that day, people who looked like provocateurs were next to him. For example, outside the Capitol door next to Chansley, there was a guy wearing a MAGA hat and a huge “Kekistan” flag on his back. The platform seems to be another location that was infested by provocateurs.

The image is from the DOJ Statement of Facts against Jacob Chansley.