What a tangled web we weave …

Update: Steele might have learnt what the DNC wanted him to write about Trump directly from the DNC, rather than indirectly through MSM. DOJ official Bruce Ohr reportedly communicated with Steele in the time when his wife Nellie Ohr worked for Fusion GPS that hired and worked with Steele.

The leaked “opposition research” (mostly smear) on Trump consisted of 230 pages. Only one short paragraph was devoted to allegations about Trump’s relations and attitudes towards Russia. Thus, neither the DNC nor Hillary campaign believed around May 2016 that there was even a small impropriety in Trump’s connections with Russia.  The opposition research file was apparently dated December 2015, but the DNC allowed it to leak between late April to early June of 2016 (likely on June 12-14), then advertised it in the WaPo article on June 14, 2016.

The liberal media attitude toward Putin changed from lukewarm to hostile almost overnight between July 16 and July 21, simultaneously with the creation and adoption of the Trump-Putin conspiracy theory as a major part of the Democratic Party line.

Evidence from media coverage in May-August 2016

To avoid cherry picking, I sampled the mainstream media articles using Google Search. The anti-Russian hysteria and accusations of Trump-Putin collusion started on July 18 after the DNC and Hillary campaign had learned that WikiLeaks was going to publish a large cache of leaked DNC documents, and planted media stories with bizarre allegations ranging from Trump is strangely accommodating to Russia to Trump is Putin’s puppet. In a few days, hysteria grew into a frenzy.

The results from the first page of Google searches for Hillary Putin for May to August 2016, conducted with cleared cookies and cache, and reviewed by me manually:

June 1 – July 15, 2016: mixed results. The liberal media tends to like Putin and to think that Putin would prefer Hillary. From the first page:

06-05: Moderate conservative Forbes writes about alleged “Putin’s Army of Internet Trolls” influencing Hillary’s email scandal. Notice that it talks about the old Hillary emails, the emails that had leaked from her illegal server during and prior to 2013.

06-15: Another Forbes article by the same author develops the same idea based on the DNC announcement in WaPo.

06-16: Observer publishes an article Vladimir Putin Has Everything He Needs to Blackmail Hillary Clinton.  American intelligence officers are asking not ‘if’ but ‘when’ the Kremlin will dip into its arsenal of Clinton collateral. If Putin can blackmail Hillary, then Putin is more likely to prefer Hillary as president.

07-04: CNN publishes Putin’s Pick: Clinton or Trump? The article is thoughtful and measured. It’s hard to imagine such an article in CNN today. The article concludes that, on balance, Putin would prefer Hillary:

“Though Putin has repeatedly promised to “work with any U.S. president,” he insists that Russia should be treated like an equal partner, and that the United States should not act from a position of strength and exclusivity — a message the next American president should take to heart. Clinton vs. Trump. Of the two candidates, Hillary Clinton is most likely to heed this message.”

07-21: The Atlantic publishes a hatchet editorial by its editor-in-chief Jeffrey Goldberg: It’s Official: Hillary Clinton Is Running Against Vladimir Putin. Fulfilling what might be the Russian autocrat’s dearest wish, Trump has openly questioned whether the U.S. should keep its commitments to NATO.

The claim in the subtitle, alleged on an “edited transcript” of the same day NYT interview with Trump, is FALSE. But also note the sharp change of the tone of the liberal media towards Putin, and its clumsy hawkishness. Reading the interview in hindsight, one notices that the NYT interviewers attempted to entrap Trump into “questioning U.S. commitments to NATO” at least four times. Sanger and Haberman are NYT jornos.

SANGER: … If Russia came over the border into Estonia or Latvia, Lithuania, places that Americans don’t think about all that often, would you come to their immediate military aid? [Attempt #1]

TRUMP: I don’t want to tell you what I’d do because I don’t want Putin to know what I’d do. [sic!] I have a serious chance of becoming president and I’m not like Obama, that every time they send some troops into Iraq or anyplace else, he has a news conference to announce it.

SANGER: They are NATO members, and we are treaty-obligated —— [Attempt #2]

TRUMP: We have many NATO members that aren’t paying their bills.

SANGER: That’s true, but we are treaty-obligated under NATO, forget the bills part. [Attempt #3; WTF]

TRUMP: You can’t forget the bills. They have an obligation to make payments. Many NATO nations are not making payments, are not making what they’re supposed to make. That’s a big thing. You can’t say forget that.

SANGER: My point here is, Can the members of NATO, including the new members in the Baltics, count on the United States to come to their military aid if they were attacked by Russia? And count on us fulfilling our obligations ——

TRUMP: Well, I’m not saying if not. I’m saying, right now there are many countries that have not fulfilled their obligations to us. [All attempts are rebuffed without questioning any U.S. commitments to NATO. Trump did not question even commitments to Estonia, Latvia, and Lithuania that had been questioned by prominent Republicans before him.]

The screenshots of Google searches 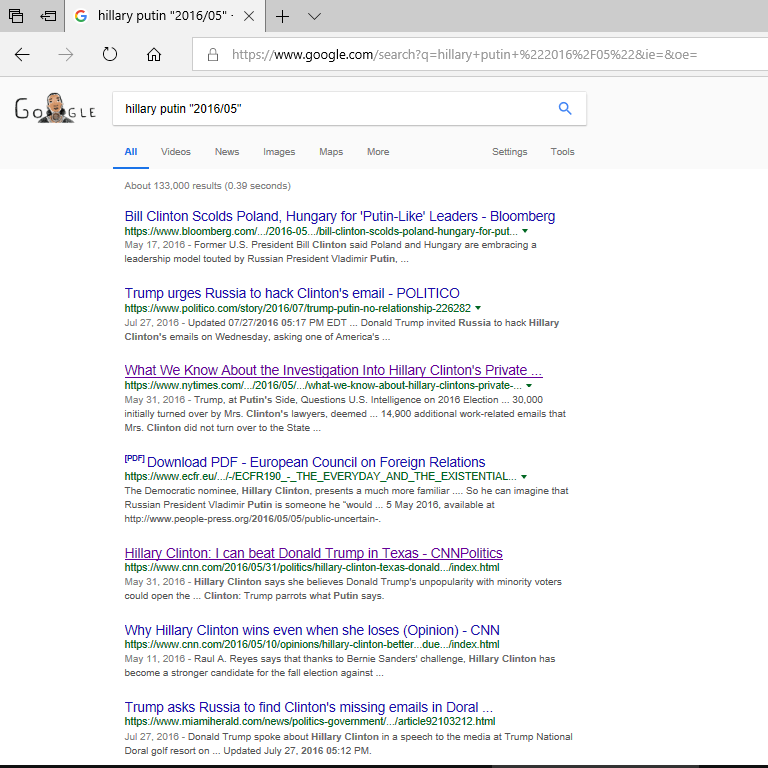 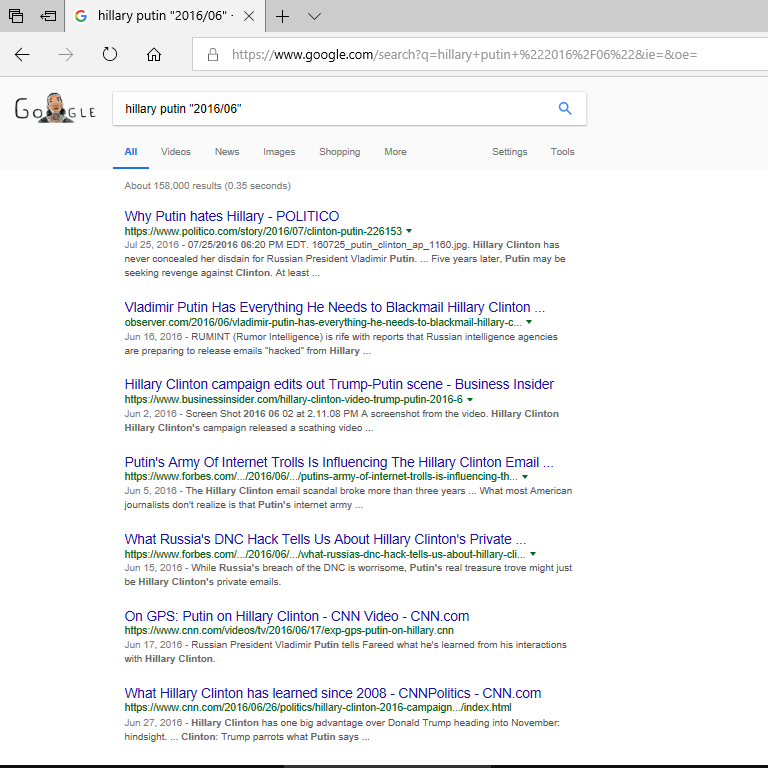 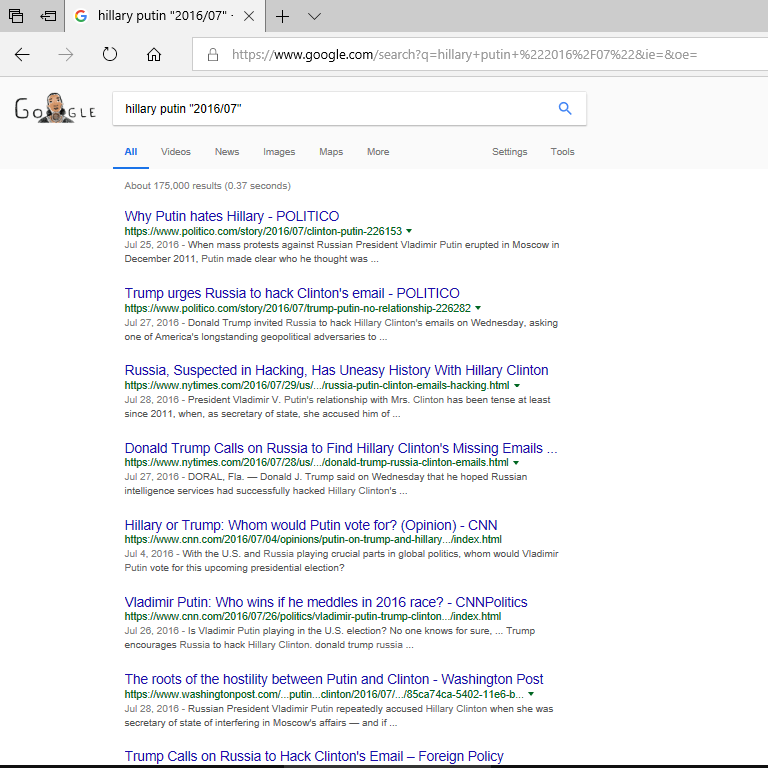 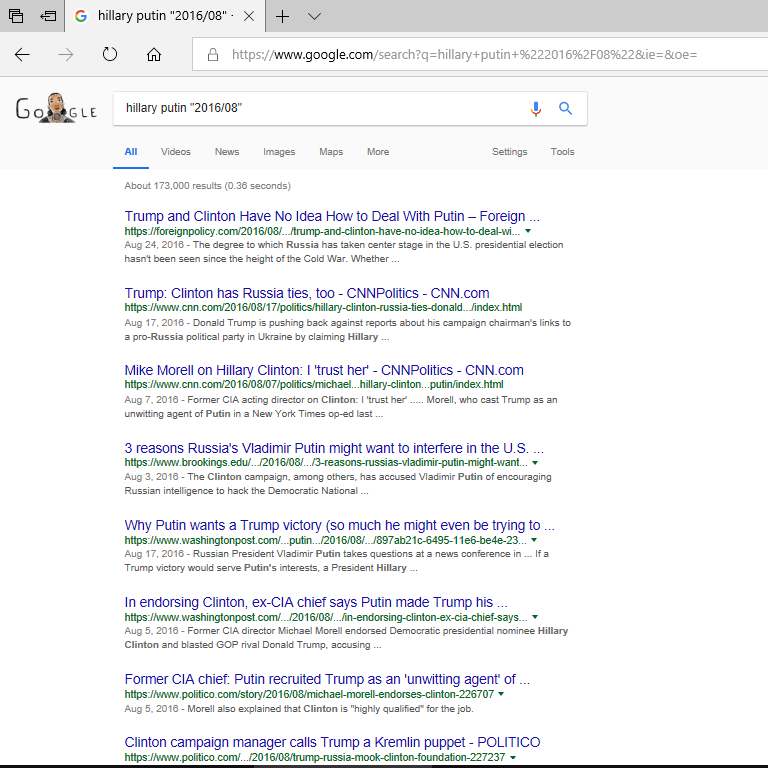 Nancy Pelosi, a world-renowned expert in cyber security, energy, atmospheric physics, meteorology, biochemistry, and all other sciences and technologies, knew that for a fact long before the NSA, DHS, DNI, or CIA had an opportunity to even ask for evidence.  Hillary Clinton, an expert of the same standing, shared her confidence. When Nancy Pelosi and Hillary Clinton knew something for a fact, who could dare question that “fact?” Certainly not government agencies.

“I do not want Americans and, you know, good-thinking Republicans, as well as Democrats and independents, to start to believe that this is a normal candidacy,” Mrs. Clinton said of Mr. Trump’s campaign on NBC’s “Meet the Press.”

Yes, she said this. Americans and good thinking Republicans.