2022-09-06 update: In May 2016, RT called Trump “More Caligula than Augustus … America’s answer to Mussolini, and just like the Italian fascist dictator”. Also, the Obama administration made US dependent on Russia for the nuclear fuel and space flight.

It’s almost funny that the so-called Intelligence Community Assessment (January 6, 2017,  Assessing Russian Activities and Intentions in Recent US Elections) claimed that the Russian interference had been against Hillary and in favor of Trump, although most of the evidence in it demonstrated the opposite. RT (Russia Today TV) and IRA (Internet Research Agency, a “troll farm” in Saint Petersburg) agitated in favor of Hillary and the policies of the Democratic Party, and against Trump and the policies of the Republican Party.

RT was anti-Trump in the 2016 elections (from The Nation)

The Nation is far from being pro-Trump. I think it might be called an Old New Left. This is what it says on the subject, with the links to the RT footage. The following are long quotes from The Nation.

RT America Was Not ‘Pro-Trump’

The problem with the claim that RT America is pro-Trump is that it is simply false. Many of the channel’s biggest names were either ardently anti-Trump or highly skeptical of what a Trump presidency might mean for America.

Chris Hedges, a Pulitzer Prize–winning journalist and former Middle East bureau chief for The New York Times and host of the show On Contact, had a consistent anti-Trump outlook. Hedges called Trump “woefully unprepared” for the presidency and said his election could mean the creation of a “draconian police state.”

Stalwart liberal Thom Hartmann, who hosts The Big Picture, has aired programs with names like: “Dictator Trump Threatens Free Speech,” “Why Trump’s Cabinet Is a Basket of Deplorables,” “How Trump Could Bring on the Crash of 2016,” “Does Trump Mean the End of the Internet as We Know It?,” “Why Trump’s Win Is a Koch Coup Against Our Democracy” and “Is Donald Trump the Master of BS?”—to name a few.

Ed Schultz, who hosts News with Ed Schultz, also routinely ran segments that criticized Trump. “Who’s gonna stop Donald Trump!?” pleaded Schultz before a segment on how the GOP was worried about the reality-TV star’s unstoppable rise. Schultz also aired an interview with Bernie Sanders lambasting Trump’s bigotry and sexism and calling Clinton “far and away the superior candidate.”

A simple look through RT America’s YouTube channel throws up numerous clips in which guests refer to Trump as misogynistic, bigoted, and racist. Guests on RT America have also claimed Trump does not stand up for regular workers, that his presidency would be exceedingly harmful to the markets, that he is not to be trusted on Social Security, and that his election could be more threatening to the global economy than ISIS. A political psychologist invited on to discuss whether Trump was a “textbook narcissist” called Trump “unstable.”

RT America has also critically covered Trump’s plans to “load up Guantánamo” with “bad dudes,” run negative segments on his personal taxes, reported on Latinos fearing deportation of friends and family, criticized his joke about assassinating Hillary Clinton, covered controversy around his choice of Steve Bannon as chief strategist, and ran segments calling both his health-care and foreign-policy plans lacking in detail.

The New Intelligence Report On Russia

“The report contains not a shred of forensic evidence that the Russian government directed the hacks of the DNC or of John Podesta.”

“Instead of demonstrating conclusive links between the government of Russia and the hackers or between the government of Russia and Wikileaks, we are provided with a series of undocumented, evidence-free assertions of “high confidence” that Vladimir Putin directed an influence campaign to discredit Hillary Clinton in order to hurt her chances at the polls in November.

The report is marred by a reliance on innuendo and amateur psychological insights into Putin’s motives, while adding no new forensic or other hard evidence. Nowhere does the report indicate that ODNI’s sweeping conclusions were based on either HUMINT (human intelligence) or SIGINT (signals intelligence).”

Russiagate Is More Fiction Than Fact

Within 24 hours of Clinton’s concession speech, top officials gathered “to engineer the case that the election wasn’t entirely on the up-and-up.… Already, Russian hacking was the centerpiece of the argument.”

RT Supported Hillary in the 2016 elections

RT preferred Bernie to Hillary, but when Bernie accepted the primaries defeat and endorsed Hillary, RT broadcasted his support to Hillary, and aided Hillary against Trump in other ways. In the following frame, RT’s Ed Shultz helps Bernie to deliver his endorsement of Hillary. 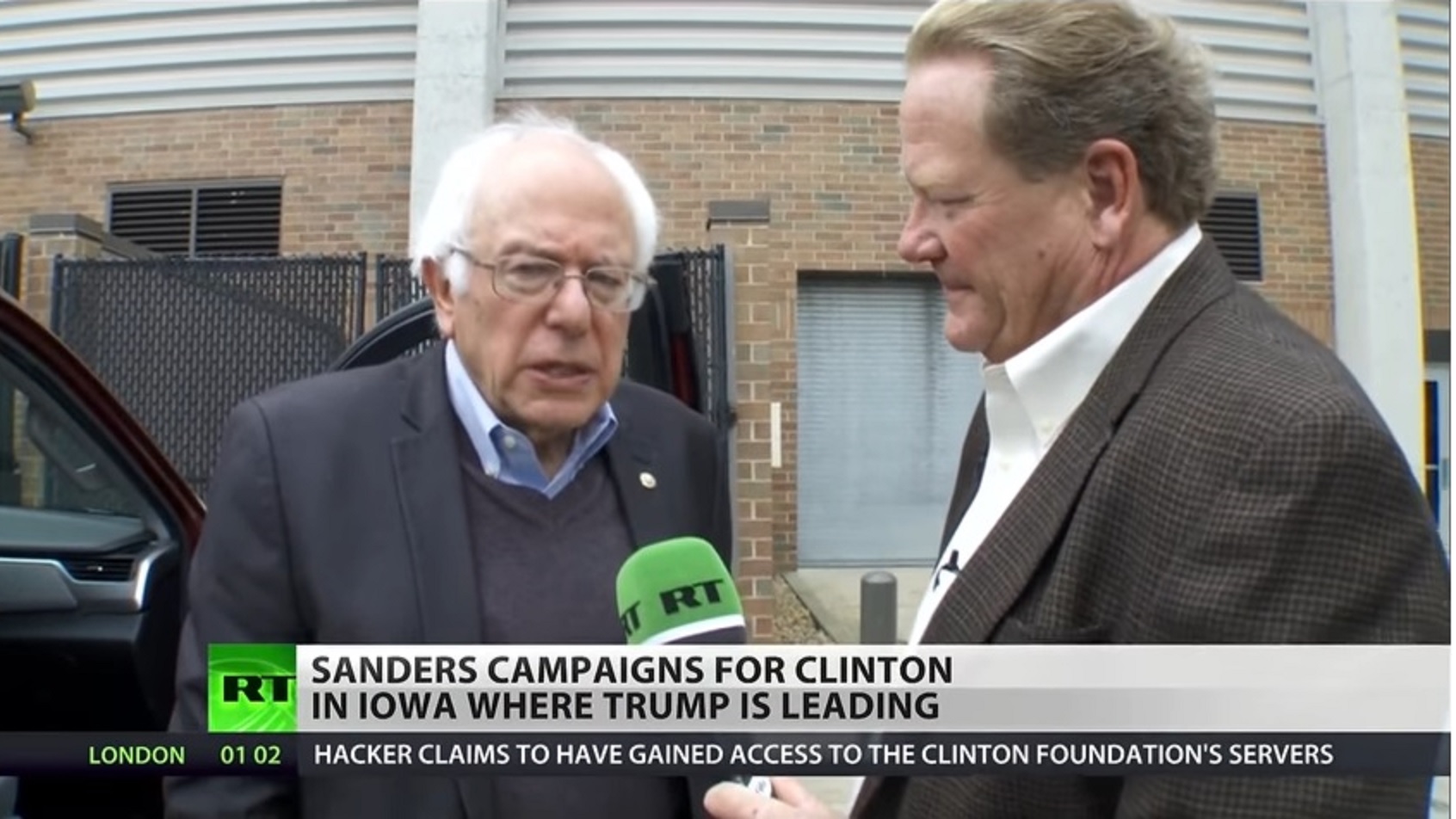 Hillary Clinton speaks at a rally in Philadelphia 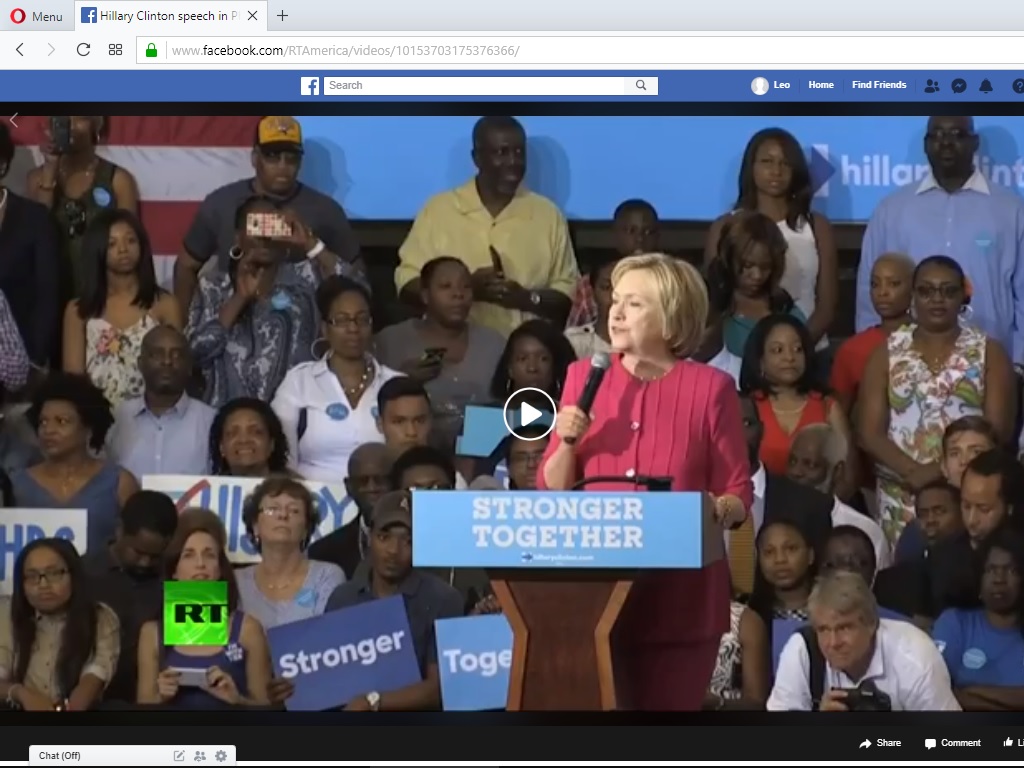 The suppression of U.S. natural gas production and anti-fracking under environmental pretexts was a mainstream policy of the Democratic Party since 2013. In the dark blue Massachusetts, the Democrats have even achieved dependency on Russia for natural gas, despite being just a few hundred miles from the Marcellus Shale, one of the world’s largest natural gas fields. From the Assessment (p. 8):

“RT runs anti-fracking programming, highlighting environmental issues and the impacts on public health. This is likely reflective of the Russian Government’s concern about the impact of fracking and US natural gas production on the global energy market and the potential challenges to Gazprom’s profitability (5 October).”

Of course, the MSM has misreported the Assessment.

A broad assault on the energy industry — to “disrupt Florida and other U.S. energy pipelines” and to “disrupt the booming American energy industry” — has been conducted by Obama, Hillary, and the Democratic Party since 2010. A “Russian connection” has been acknowledged by some small MSM outlets only recently.

“A television crew from Russia’s largest state-backed network swooped into downtown Miami two days before New Year’s Eve, 2016, on a curious mission. RT, the network formerly known as Russia Today, was there to provide global news coverage of one of five unremarkable rallies across Florida that day aimed at turning the public against the nearly completed, $3 billion Sabal Trail Pipeline designed to carry natural gas to the state from Alabama.”

“Russia’s hidden hand in the Florida pipeline protests was extensive, according to sources familiar with the operations. At least eight Russian accounts, most tied to the troll farm known as the Internet Research Agency, sent at least 16 social media messages excoriating the Sabal Trail pipeline or retweeting messages from one of its most prominent opponents, a frequent guest on RT. The tweets were sent to a total of more than 40,000 followers as well as anyone else who saw them via hashtags. [This is not extensive – but neither was the whole alleged IRA operation. LG]

The social media propaganda was part of a broad Kremlin campaign to disrupt the booming American energy industry, which seemingly overnight has emerged as a threat to Russia’s global dominance, U.S. authorities say.”