2021-09-29: added a tweet by John Brennan, hinting that he was aware of the Democrat plans to provoke violence in the Capitol building, to blame Trump, and to force voting at gunpoint of the “Pelosi police”.

Look how the Pelosi police walked the Congressional staff on January 6 – with their hands up (per WaPo, Jan 6): 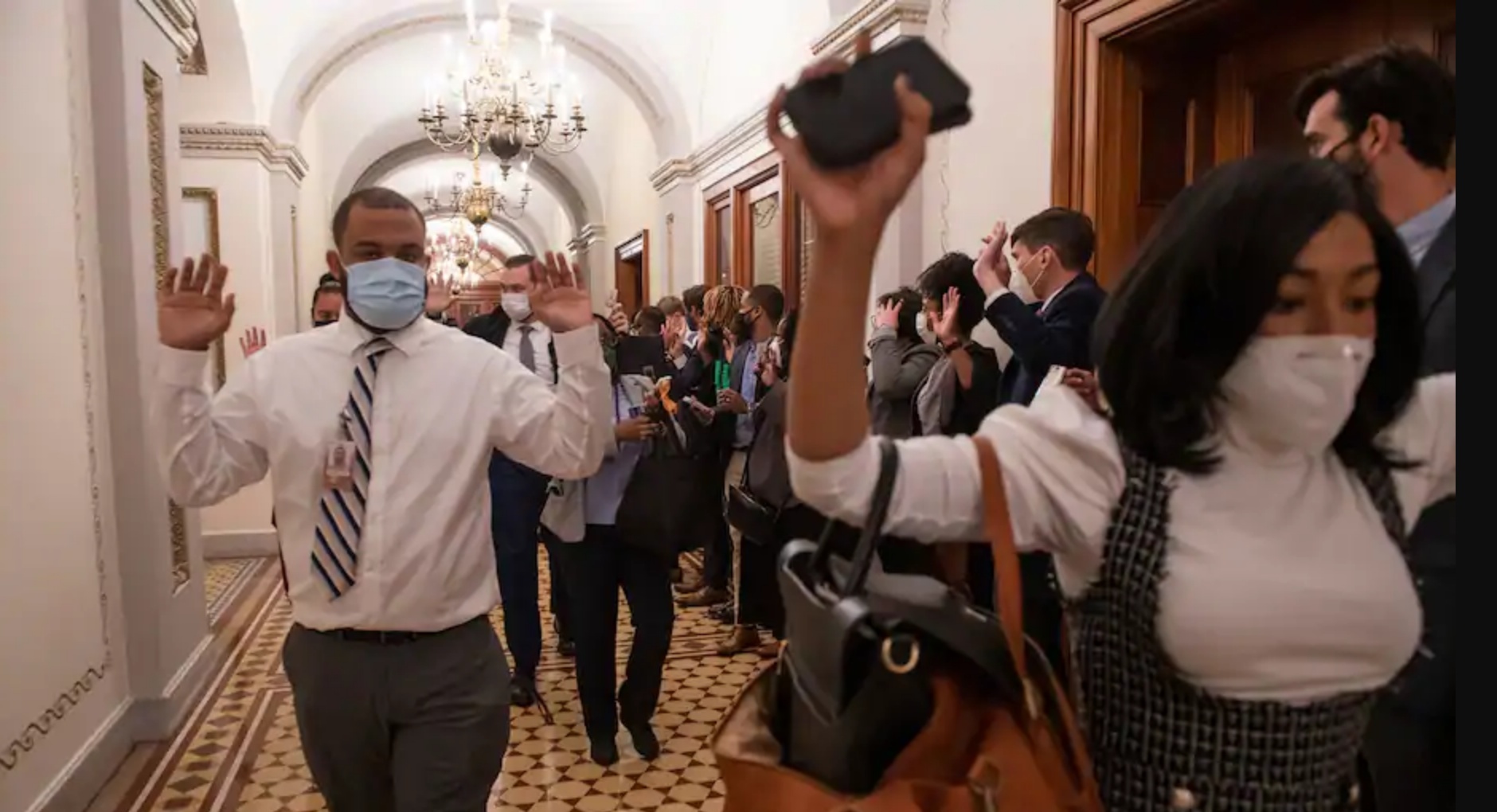 But this article is related to the timeline of the events inside the Capitol building. At 1:11pm President Trump completed his speech at the Ellipse. Music continues to play. The rally attendees listening until the end of the Trump speech (as one would expect from the most hard-core Trump supporters) would start arriving to the Capitol building at 1:50pm.

In reference to the tweets from the Dem Congresspersons, bear in mind that they have been receiving information from the media, not only reporting what they witnessed or expected to happen.

The times on the tweets is likely rendered according to your time zone.

Only thing the title to Thomas Friedman’s op-ed gets wrong is that it is in the past tense. Today, in a Joint Session of Congress, it remains to be seen what some deadenders may do to defeat the will of the people.

If Republicans plot a coup, how does this Democrat knows that? Maybe, he says that to justify the Democrat own coup as a ‘counter-coup’.

Any senator who objects to certifying the election results is betraying their oath of office.

No riots or violence yet, but Republicans are already called “betraying their oath of office.”

Heading to the floor to uphold our democracy, respect the will of the people, and count 306 Electoral College votes for @JoeBiden and @KamalaHarris.

On this day, such comments are made by people known for their prior statements that America is unjust or illegitimate country.

Today Congress will smother the last gasps of Trumpism by voting down the coup attempt by @realDonaldTrump. America will NEVER be like the 1950s.

-Our Vice President elect is Black, Asian & female
-We watch reruns of Modern Family, not Leave it to Beaver
-Hugo Chavez is dead https://t.co/iuTezZfcpZ

FACT: With 81 million votes cast, the American people delivered a resounding victory to the Biden-Harris ticket.

Today, Congress will meet to count the results and officially declare @JoeBiden and @KamalaHarris as the next President and Vice President.https://t.co/6gmS1ysJcU

[CORRECTED on 2021-01-19] The picture and text of the AP article reflect a later version of it. The version that was tweeted is in archive.org. Archive.org uses Zulu time, 5 hours difference from the Eastern time.

Stop the coup! The US Congress, under the Constitution, has one responsibility with the Electoral College: “To open all the certificates and the votes shall be counted.” To throw out votes because you don’t like the outcome is an insurrection.

GOP Senators just officially objected to counting the votes in a state Trump lost with one goal: keeping Trump in power despite his election loss. This is a direct assault on our We the People Constitution.

Cannon House office building — which is massive — is also being evacuated, per multiple sources.

This is what you have done Trump. And @HawleyMO and @SenTedCruz You should be ashamed. https://t.co/WhoTkELUJf

Remember this the next time Republicans tell you they are the ones defending the police. God Bless the officers holding the line for democracy. As we say in our police family, #BeSafe. https://t.co/yw0sHmypzM

I’m in Cannon and have been evacuated. But it doesn’t matter. In less than two hours I will cast my vote rejecting the coup attempt by @realDonaldTrump enablers and accepting the Electoral College votes of Arizona. And there is nothing @POTUS or @GOP traitors can do about it. https://t.co/zfQemZwm9q

Watching the protests outside the Capitol, I’m reminded of the oath I swore to support and defend the Constitution.

Today I will continue to uphold that oath. pic.twitter.com/FpnERBBmvs

This photo and words suggest that he knew the script. There was no real world  danger  or appearance of danger at that time. It seems that Sen. Mark Warner was acting according to a script. He also had a photographer to memorialize this moment.

Quite a split screen: Mitch McConnell … in a remarkable moment of breathtaking historical irony … arguing that for congress to overturn an election would unleash an every four year mad rush for power 👀 … and in the small screen: Trump Freedom Medal langolier Jim Jordan. pic.twitter.com/fqN5rSsQV4

Senate is still in session, although some buildings have been evacuated.

Staffers are being evacuated from House office buildings, an angry mob is trying to storm the Capitol, and many @HouseGOP and @SenateGOP members are trying to overthrow our election.@realDonaldTrump wants to set this nation on fire in his final days.

But we WILL NOT back down. https://t.co/o6qunLYJRK

Nope. You caused this. You break it, you buy it. https://t.co/cZ7RT5TYxE

Levin, Beck and Cruz getting the band back together…. pic.twitter.com/wwnWASV84a

“Exterior threat” now being announced in the Capitol building, people not allowed in or out and people being told to stay away from windows.

When strong Republican Senators got together, the Capitol police announced “exterior threat.”

Is the Senate Floor being evacuated?

This assault on our nation’s Capitol is a coup attempt and all those involved should be prosecuted as such.

Also, for those Dems saying we shouldn’t impeach @realDonaldTrump again? You are wrong. https://t.co/N2L3wg4rnP

As Representatives, we swear on oath to defend the Constitution against all enemies, foreign and domestic.

Any elected official who does not denounce this full frontal assault on our democracy is assisting a coup attempt on the Capitol.

The Capitol is on lockdown. Violent Trump protesters are threatening the People’s House.

My office has been evacuated. Staff are safe. Praying for the safety of the Capitol Police officers who keep us safe.

This is not what our country should look like. We’re so much better.

I’m currently sheltering in place. The Capitol building has been breached and both chambers are locked down.

This is the chaos and lawlessness @realDonaldTrump has created.pic.twitter.com/RBAi4IW0Fm

Now is the time for @VP @Mike_Pence to start the 25th Amendment process. https://t.co/GQ0NXhyAK9

Now is the time for @VP @Mike_Pence to start the 25th Amendment process. https://t.co/GQ0NXhyAK9

He does not believe that he is in danger.

I am currently in the House Chamber presiding in the chair. The doors to the chamber have been locked because protesters have breached security. We will not be intimidated.

Trump’s violent supporters have fought the police and forced our Capitol into lockdown as Trump tries to lockdown our democracy. Where are Trump’s tweets in support of law and order? Why isn’t Abbott “backing the blue?”

I am horrified that colleagues & staff are on lockdown in House office buildings as I tweet this.

I am equally horrified that Trump & members of the GOP have called for this blatant attempt to disrupt & undermine our democracy.

Please stay safe. This is dangerous.

This is what Trump wanted—his violent supporters have stormed the Capitol. Trump’s sedition: determined to keep us from doing our constitutional duty.

We’re on lockdown right now in the Chamber.

Blood will be on the hands of those perpetrating the big lie that Trump won.

Violent protestors have overrun the United States Capitol, the seat of our country's popular democratically-elected government.

Incited by Donald Trump, they have halted with threats of force the peaceful transfer of power in American government established by George Washington.

John Brennan the Traitor could not restrain himself:

One person is responsible for the surreal act of sedition unfolding at our Nation’s Capitol.

His name is Donald J. Trump, & he is being enabled by many Republicans in Congress.

Trump must be held accountable.

He is an indelible blight on America’s soul.

Citizens were walking into the Capitol with American flags, but Brennan was speaking of “surreal act of sedition.” Sounds like an admission.

Not sure that Elissa Slotkin was innocent, but even she wrote “I am remaining safely in my office,” and was calm and professional in the tone.

I am remaining safely in my office, as are my staff who were directed to stay home. Rep. Andy Levin is with me since his office building was evacuated. I have seen first hand today the bravery of the Capitol Police, and I’m thankful for their professionalism and dedication.

If the US Military leadership does not agree to protect the US Capitol, they should resign now or be removed. https://t.co/atpR1VWQVC

I am safe in a secure location. When the situation is under control, we will resume proceedings on the House Floor. America's democracy will never be deterred. Not today. Not ever.

This tweet betrays too much foreknowledge. What if there are bombs in the building? What if there are casualties among the Congress members? Some lawmakers are quite old, and might be unable to continue just due to fatigue or stress alone.

The Democrats were prepared too well for the situation.

Why have CJCS Chairman Mark Milley talked to her at all?

.@SenSchumer and I are calling on President Trump to demand that all protestors leave the U.S. Capitol and Capitol grounds immediately. pic.twitter.com/z6D8qb6bpe

He did that, but the Big Tech deleted those calls.

Let me be very clear: the scenes of chaos at the Capitol do not represent who we are. What we are seeing is a small number of extremists dedicated to lawlessness. This is not dissent, it's disorder. It borders on sedition, and it must end. Now.

Apparently, Joe Biden did not participate in the putsch. He was not allowed because of the mental illness.

From Jan 5, talking about a coup

Tomorrow is an extremely inconvenient time for a failed coup attempt.

All eyes on Georgia w/our exciting senate race. Proud of Jon Ossoff & Raphael Warnock. Spoke w/ @maddow & @clairecmc tonight re both Georgia & our growing ranks of “coup fighters” for tomorrow’s votes. We will uphold the state results, the Biden victory & the will of the people. https://t.co/ntw9FOXc1C